MARVEL, the good ol days and the latest bullshit 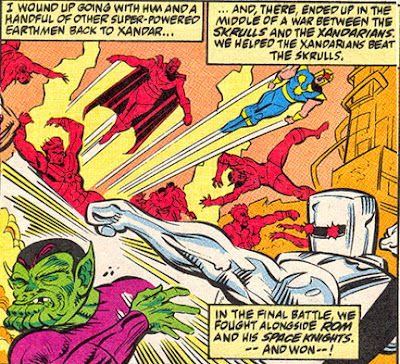 So I'm going to open up this posting with something from the past when Marvel was actually cool. I want everybody to give it up for The King of Thessaly (K.o.T) for sending me this clip art from New Warriors Annual #1 (1991). Can't believe I didn't know about this already! As you can see this Rom cameo flash back is making a reference to Rom #24, however the editorial seems to be a bit off there were no spaceknights in that issue it was only Rom himself fighting along with the Champions of Xandar against a Skrull invasion.  Hey K.o.T, was this issue one of your flea market or dirt mall questing finds?


Moving right along, let's talk about the present, which is a not so good time for Rom fans when it comes to Marvel. I told you all a while back when Infinity #1 came out that jonathan hickman would do this. This panel which came from the recent Avengers Infinity #21 (thanks for the heads up Gary Martin Jr.) is some of the table scraps that I told you all hickman would throw to Rom fans to try and keep us on the hook.
This doesn't even make any sense. The character intro at the beginning of the issue shows a head shot of Starshine as the armor was in it's original incarnation (more or less) that we saw in Infinity#1. So why are we seeing the Starshine 2 armor (but with a pony tail) here? I don't have to tell long time Rom readers why that doesn't make any sense. And as you can see Ikon is there too which also makes no sense since they were both on Galador when it was destroyed. Is hickman gonna come up with some "creative writing" or is this just some inconsistency they didn't think anybody would catch? Whatever, hickman you're still a douche so you don't get my money on this one either.

LAST CALL! Look, speaking of douche bags don't be one and let Bill Mantlo's birthday come and go this year with out showing this great man a sense of gratitude in a way that's the next best thing to telling him in person. Even if you live on the East Coast if you can get off your ass and get a card into the mail addressed to me in the next 2 - 3 days that should still leave enough time for it to arrive before I send the whole thing to his brother.


Alright so let's end this posting on a fun note as with the latest video from The King as he shows us his extensive action figure collection along with some other things like published clip art from Marvel and DC that was so disturbing it'll have you saying to yourself "What the Hell were they thinking!?"

Ok so one last thing here. I wrote this posting after midnight when I finally got home from work and this morning I end up finding this innovative fan art. This obviously doesn't fit a narrative of the Rom universe as we know it but then again it isn't supposed to since it's a homage piece to those old mystery and sci-fi novels of the 30s which were largely regarded by the "literary community" as pulp. But then again those are the same sorts who say that about comics and let's not even get into all the art snobs out there who think comic book art is beneath their notice. Remember I was an art major in college (multi-media) so I was around a lot of those assholes for years. Rather you like the concept or not you gotta hand it to the artist (Rob Reis) for having some serious illustration skills.
Posted by Shlomo Ben Hungstien at 2:44 AM