Now I was talking in another posting recently about the Wraith War spill over in X-Men issues 185, 186, 187 and 188. So to find this footnote (thanks Gary) in a future issue (#225) with Rogue's reflections on the X-Men having saved Forge from a Dire Wraith assassination attempt was not at all surprising. 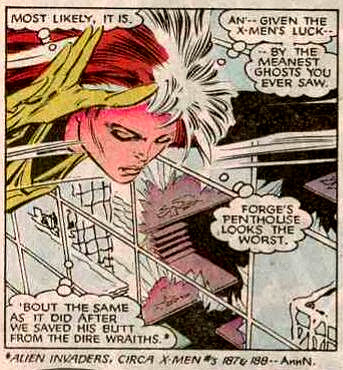 But I was having some trouble with this X-Men foot note in Iron Man 190. I've been sitting on this clip art for a while now but I recently did a double take on it . . . . 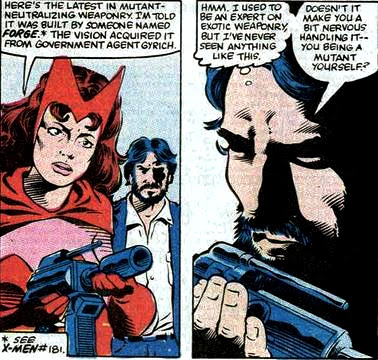 X-Men #181? Well I checked out some online reviews on that X-Men issue and as far as I can tell it's got nothing to do with anything that Wanda is talking about in the clip art. In fact it's pretty much just a Godzilla tribute story that takes place right after the events of the first Secret Wars mini-series. But I later found out by commentator RT who does have the issue that there's some mention of the mutant registration act or something like that. But it still seems to me X-Men 184 or even 185 would have been a more appropriate for that foot note.

But just in case you didn't know, or forgot Forge's first ever appearance in the Marvel Universe was in X-Men 184. Thanks to an online review I discovered recently along with some clip art from the issue provided by Rom curator Gary Martin Jr. I now see that this X-Men issue is an important tie-in to the Wraith War story line in the Rom series. Not only do we see the hand held neo-neutralizer prototype for the first time Forge also makes a direct Rom and Dire Wraith reference.
On a side note here it's too bad we never got to see Forge's neutralizer used on Hybrid that would have been interesting. We've seen it's effects on dire wraiths and homo-superior alike and even though the X-Men's computer Cerebro identifies Hybrid as a mutant he's still in a class all his own.
Posted by Shlomo Ben Hungstien at 12:00 AM