IDW stepping up for ROM fans in Onyx 4 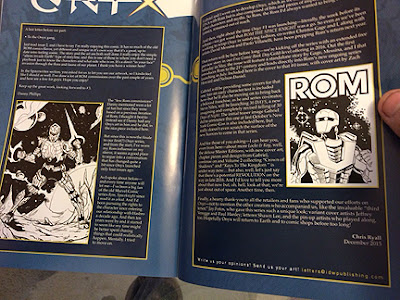 Well how about that almost right on the heels of my latest "fuck marvel" posting we see IDW stepping up for ROM fans in the final installment of the Onyx mini-series. First off, the letters pages doesn't just mention ROM several times but their mostly devoted to ROM related chatter not to mention the ROM fan art that's featured (not mine this time just for the record). 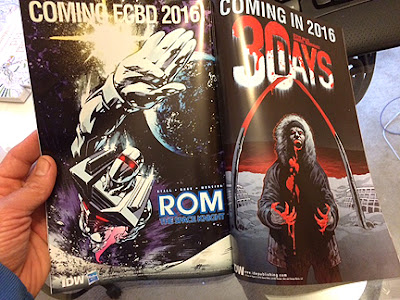 And as soon as you turn the page BOOM! We get to see the first time published full page house ad of the ROM zero issue for Free Comic Book Day. This is just a quickie posting I haven't even had a chance to read the issue in full with my impending start time at work today looming over my shoulder. But I most certainly will get a chance to read it after I get off work tonight and will also probably have more to say here. In the mean time I again say loudly and proudly FUCK MARVEL and bravo to IDW (so far).

.... Ok I'm back and for those of you who don't have a copy of Onyx #4 here's what the letters page consists of. It's actually just one letter by artist and fellow Rom fan Dann Phillips along with his Onyx fan art. But that only makes up the first half or so of the first page the rest is a lengthy reply from Chris Ryall in which we learn it took around 10 freaking years for him to secure the rights to ROM from Hasbro. In fact at one point not too long before Onyx #1 was published he had all but given up on any hope it would ever happen.
It certainly begs the question what the fuck was the problem here!? Could Hasbro like not find all the legal paper work and  product files for ROM that they inherited from their Parker Brothers buy out? Then you gotta wonder if marvel maybe tried at one point and got the run around from Hasbro to the point where they eventually just said fuck this. Did IDW have to jump through as many hoops when acquiring the rights to The Transformers or G.I.Joe? Sure would be nice to get some clarity on all that but I'm not gonna hold my breath for that to happen any time soon if ever.

Jan.14th Update: Meanwhile over at marvel it's more meaningless "spaceknight shinanigans" as Gary Martin Jr. puts it. This comes to us in the pages of Uncanny Avengers 4 apparently that's Hank Pym in what appears to be some sort of T-1000 liquid metal armor. I don't know who these guys in the train engineer caps are but did they mean the Galador that was obliterated a couple years ago in Infinity #1 with all it's space knights on it? Well hey if we can have Ikon make more appearances since having been seen on a planet that was blown to bits with out any sort of explanation so why not throw these guys in the mix with some brilliantly written continuity faithful dialogue.