New fan art, new curating and a look inside the ROM zero issue 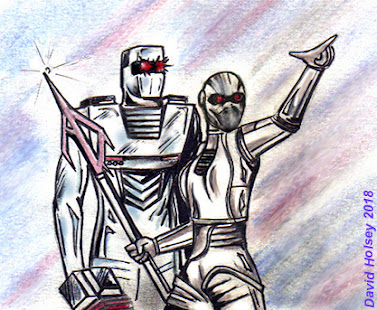 Last weekend was one of those weekends where I got to chill the whole time and as a result was able to get some cool stuff done in the way of fan art and curating. Although I hate most of what marvel has come up with in recent years I always felt like the Ikon character had promise even though she was no ROM. In fact, the last time I had any hope for marvel to finally do a modicum of justice to the legacy of the greatest of the spaceknights was when we were treated to a panel in the pages of The Avengers of Ikon leading a squad of classic spaceknights to face some mysterious enemy looming over Galador. Anyways, even today I still think ROM returning and having Ikon at his side would have been pretty cool.

Picked up this book at the library last weekend. I've seen it before but last weekend I decided to to give it a closer look to see if we might find ROM anywhere in the Marvel Comics The Untold Story. Needles to say I found the following passage rather interesting although it's hard to say how credible that claim is but I certainly hope it's true. There are two other passing references made to ROM later in the book in regards to Nova losing his powers and Secret Wars II tie-ins.

As you can see I even did some other fan art of a satirical nature this past weekend.

Alright so let's get to what you folks really want to talk about here today because everything on this posting was pretty much done by the end of this weekend. First off a big thanks to Lee Seitz for bringing this to my attention yesterday. If you haven't checked out the first few pages of the ROM zero issue for FCBD then do so now at the link below before you read on. I like how ROM makes planet fall at Pismo Beach California I was just there as part of a road trip with my wife on New Years weekend. So on another high note the art work looks great it's nothing at all like steve ditko thank god. Although I would have to say I found ROM's new design a bit jarring.
Now I don't say that because I think his new armor design sucks per se, but more because the cover art certainly didn't leave me with the impression ROM's new armor design would deviate that much from the original as seen in this clip art. It's kinda odd that a company would spend 10 years fighting through legal red tape to obtain the rights to a character and then make such drastic changes to their appearance. In fact, ROM some what resembles the watch wraith androids he used to fight in the original series. Just not sure it's the right look for him or maybe it's just a matter of getting used to it? I guess only time will tell. This has been a pretty labor intensive posting with all this art work, curating, writing and what not so this will most likely be my last one for quite a while. But I'm looking to hear from you people I want to know what's on your teeny tiny little minds about all this stuff I'm throwing at you in this posting . . . don't let me down . . .
http://www.previewsworld.com/catalogimages/STK_IMAGES_PDF/STK680001-700000/STK698017.pdf

And a big thanks to our first commentator today for bringing some of the Micronauts cover art from IDW to my attention. This is pretty damn nice! Assuming the cover art we see here is an accurate reflection of what these characters will look like on the inside well then I gotta be honest I'm feeling a bit more optimistic here then I am about ROM. Baron Karza looks exactly the same as he did in Marvel and they gave Acroyear an updated look that's really slick but it's still in keeping with how he also looked in Marvel and also a bit like the original Mego toy.


Jan. 25 Update: Two things occurred to me over the weekend. One is, that it seems like people are really squeamish about being forth coming about our first real look at ROM 2016. The second is how IDW's ROM looks more like the horrific manga inspired "spaceknights" of the 2001 mini-series then the Mantlo/Buscema series. I've always prided this blog on posting the sort of content you won't find anywhere else so here goes. I know most of you all are thinking this but I'm gonna just say it straight up, this new look for ROM sucks. After all the hype, fan support, lifting of the red tape and anticipation this is what we end up with? Well, I guess if it could happen with George Lucas then why not with Chris Ryall and Christos Gage as well?

Posted by Shlomo Ben Hungstien at 1:48 AM