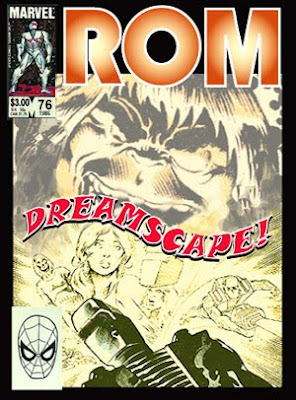 He awoke to the sound of machines, his conscious mind peeling away layers of reality that had filled his mind for what seemed like an eternity. Was it all a dream? Gone were the visions of his life which he had come to accept as reality, yet not completely. Even now, bathed in the dim glow of fading electronic light, he somehow had always known his world was not real. Some intangible urgency had pressed at the back of his mind, forcing him to secretly question everything around him. The dreamer had awoken and sat motionless as the dream faded away. What of his home world Galador? What of his wife and children? And where are they now? “I am . . .Quasimodo,” a mechanical voiced breathed away weakly from the darkness. Feeling the energy slowly returning to his body. “I,” the dreamer spoke in an attempt to respond. “am ROM. Greatest of the Spaceknights”.

The following is the hypothetical opening in a plot line by Rush Montgomery for a continuation of the ROM anthology, beginning with issue 76 entitled ‘Reboot”. ROM discovers that the life he "lived" since striking the bargain with Quasimodo (see issue 42) was not reality. That "life" was merely the result of Quasimodo's computer manipulations of ROM's subconscious. Now ROM is awake, and in desperate need of answers to make sense of it all.
We are hoping for feedback from YOU ALL for the possibility of the ROM 76 project. Please leave a comment and share your opinions for this hypothetical premise ( likes, dislikes, ups, downs, pros, cons we want to hear it all from you ). Artists who might be able to contribute are also encouraged to contact us to find out more. For a recap of ROM #42 go to: http://siskoid.blogspot.com/2009/02/spaceknight-saturdays-dream-come-true.html