The zero issue that never was 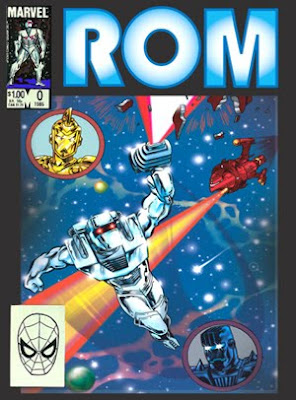 With the use of Photoshop & Illustrator I dressed up some original art by Scott Rosema in order to create a cover concept for what might have been a zero issue. I'ts too bad Marvel never did something like this after the series finale before the Parker Bro's licensing was yanked. Some kind of issue back tracking to tie up some loose ends would have been nice.
Especially explaining crap like that "snow globe" sphere thing that was salvaged from Termintor and magically turns ROM from a cyborg into human form. Or maybe something that explains how ROM and Brandy start to repopulate Galador from their . . . ahem limited gene pool shall we say? It seemed plausible to me that other Galadorians could have been hiding out in other parts of the planet. Kinda like in the Terminator films in which there were pockets of human resistance hiding through out the world.
In ROM #14 there is a cut away story about how ROM's girlfriend (Ray-na) was killed on the the planet Agricon during the Wraith invasion of the Golden Galaxy. So apparently Galadorians lived on off world colonies which makes sense. It's a common theme in science fiction concepts that deal with technologically advanced space faring civilizations. It would have stood to reason that many of those Galadorians would have wanted to return to Galador to help rebuild. Also maybe to help figure out those surviving spaceknights who's humanity got trashed might be able to become human again. Did these brilliant Galadorian scientists ever think about cloning perhaps!? I mean I know the process that Quasimodo used was some what less then perfect but cloning worked pretty good in that mediocre sci-fi flick with Arnold ( The Governator ) "The Sixth Day". Like I said before it would have been nice to have something wrap all that up in light of the rag tag ending I felt the series had. And by the Gods of Galador have any body else pencil it but Steve Dikto please!
Posted by Shlomo Ben Hungstien at 8:02 PM