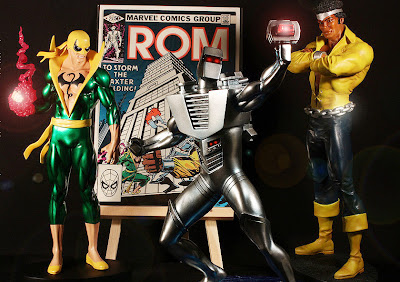 Look at these awesome statues I found of three Marvel heroes who's paths have crossed on two occasions. I know the ROM statue was done by Helder M. and Iron Fist was done by Randy Bowen but uncertain at this time who did Luke Cage. Notice how I said their paths have crossed twice? That's because the ROM issue in the back round was the second part of a story that actually kicked off in Powerman & Iron Fist #73 that guest starred ROM. Check out the statue trio set up featuring that issue at the blog site for Iron Fist fans who aren't dicks: http://ironfistfan.blogspot.com/2011/02/trio-action-figures-luke-cage-iron-fist.html This is a pretty high resolution photo so rest assured you will see it in more detail by left clicking on it to magnify. Also, check out this kick ass video of how the ROM statue was put together. It's not some boring how to video with someone droning on with narration. It's more like a rock music video, trust me:
http://www.youtube.com/watch?v=ee-m3Yjpbf0
Posted by Shlomo Ben Hungstien at 1:02 AM