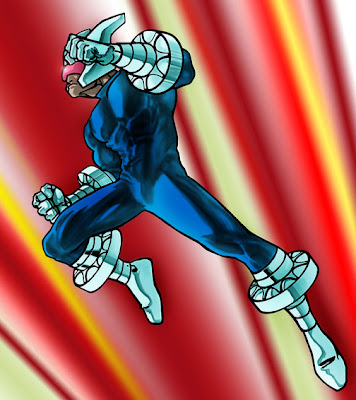 Ok so maybe given that The Torpedo (the unofficial side kick of ROM) is even a more obscure 70s - 80s Marvel character then ROM to say that I've found the best Torpedo art ever isn't saying much. Especially since I'm pretty sure I could count all the fan art of the Torpedo ever done on both hands and still have so 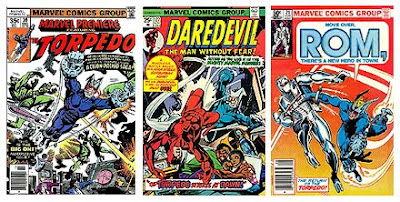 me fingers left over. But that still does not take away from this being an awesome illustration in which we haven't seen The Torpedo looking this good since back in the day when Sal Buscema use to draw him in the pages of ROM. But I don't want to take anything away from other Marvel artists who have drawn him because he was done up pretty well also in his debut appearance in Daredevil and then later in Marvel Premiere. Here, I just love the colors and

the action pose he's in. The artist has a great grasp on perspective and proper proportions that also look dynamic which is something I always like to see in comic book character art figure drawings. Also it is worth mentioning that The Torpedo has his own micro hero and that over the past year I've come across more then one custom figure made of him. In case you were wondering I found this on Deviant Art and it was done by a talented fellow by the name of Jordi Lupo. Be sure to magnify the image it's a pretty large file.
Posted by Shlomo Ben Hungstien at 12:03 AM