ROM Spaceknight custom vehicle art. Yes, on a real vehicle and no this is not photoshop this time!

Some of you who have been following this blog for a while now may recognize the art work you see here. If so that's because I featured it in a posting back in December but at the time the photo image I had found was only of the portion of the trailer that had the actual ROM illustration it's self with very little background. So it was next to impossible to tell what the image was painted on even though that didn't stop us all from wild speculation. Well now the mystery is over thanks to a link left a few days ago in the comments section of the original posting: http://romspaceknightart.blogspot.com/2011/02/galadorian-graffiti-rom-as-public-art.html What you are looking at here is a mobile laboratory from M.I.T. Unfortunately that's all the information I have on it but at least now the mystery is solved as to what and where this ROM "thumbs up" illustration is done on. Ya see folks, this is why I love people who take the trouble to leave comments on blog sites. The exchange of opinions and information really does make the blogging experience funner and because among other things it can lead to cool discoveries like this one.

September 20 update
Case and point, thanks to a comment left by ~P~ from The Sanctum Sanctorum on the previous posting I found out 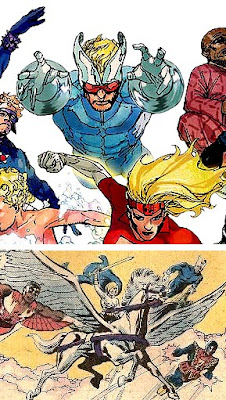 about a what I can only describe as a Defenders "where are they now" Marvel Handbook. I suppose it's some sort of index about the status of pretty much every one who's ever been a member of The Defenders. That includes The Torpedo who as I understand it was on the team between issues 62-64. You see him in the bottom right hand corner of issue 64 there? So anyways it looks like The Torpedo will not only get a mention in the book but he also made in on the cover which I think is pretty cool. The Defenders handbook is due to debut some where around December. For a Defenders #64 recap go to: http://defendersfan.blogspot.com/2008/12/defenders-for-day.html
Posted by Shlomo Ben Hungstien at 7:08 AM