When I learned last year about the Dire Wraith and Torpedo armor story line in the first New Warriors series I went on the hunt for several back issues. I had found all but one that I just couldn't get my hands on no matter how many back issue bins I went through at the various comic shops in the San Francisco Bay Area. So finally I had to break down and have my local comic shop special order #60 (1995 Vol.1) for me.

I'm sure most of you remember how ROM's energy analyzer was used to activate The Torpedo's visor optics which in turn had already been modified to detect dire wraiths at the lab where Brandy Clark worked at.
So I think it was really cool how they carried that little detail into this New Warriors issue. Ya know it was just one of those little things that makes a ROM fan like me take a little trip down memory lane which means a lot these days. 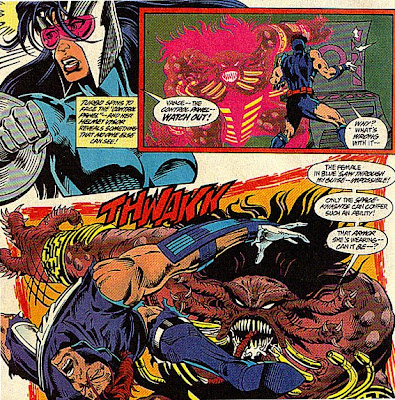 And the ROM nostalgia in this issue just keeps on coming! 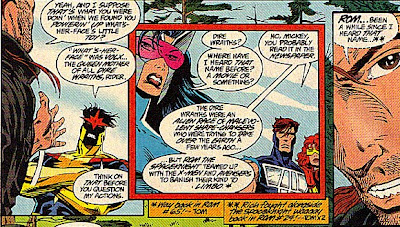 Ofcourse this would be the prologue to the hunt for the Torpedo armor by the dire wraith queen Volx. All of which would be part of the conclusion of the New Warriors series (#73,74,75). Volx would eventually obtain the armor for which we would learn about the full range of it's powers it possessed that both Brock Jones and Mickey were never aware of. I hope you all enjoyed this clip art I don't believe you'll find it anywhere else on the internet. A full synopsis of the issue can be read here: http://newwarriors.com/synopsis/volume-one-p3/new-warriors-60
Also, check out this awesome Turbo splash page from this issue featured on It's a Dan's World: http://www.itsadansworld.net/2012/04/now-thats-splash-page-new-warriors.html