ROM and his international appeal 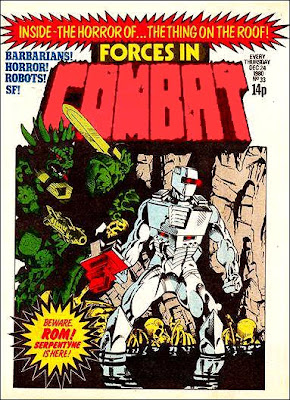 Well folks, Frank from West Virginia does it again! He recently sent me a treasure trove of ROM clip art from foreign sources. As you all know ROM was republished in various formats in several other countries like The U.K., France, Brazil, Spain and even Turkey. In The U.K., ROM appeared in a Marvel compilation magazine that featured a hand full of characters/titles known as Forces in Combat. The covers usually were a collage of Marvel characters but the example here I'm featuring happens to be an exception. That's cool how this Michael Golden cover art seems to pop up all the time isn't it? But to my surprise ROM did have his own book in the U.K. at least as a one shot. A summer special to be more precise, which is kinda funny since the U.K. only sorta gets a summer every year. But I digress, let's move on here . . . 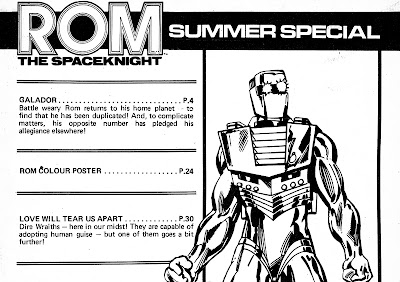 From looking at the table of contents page (magnify) and at the clip art below it's pretty obvious what's on page 4 and 24. But as for page 30 that happens to be the back story from ROM #25 in which ROM encounters a Dire Wraith commander who genuinely embraces humanity and is subsequently spared a one way ticket to Limbo. Again ROM demonstrates how despite being a bad ass interstellar warrior for over 200 years his moral compass is still intact as he exercises judgement and wisdom the likes we wouldn't see until Optimus Prime hit the comic book scene. Of course the only other Wraith we've known to ever become "human" was Jacob Marks, who was Hybrid's father. Unfortunately that story however did not have a happy ending. 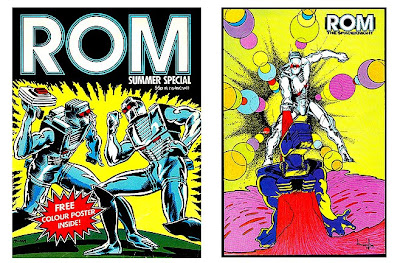 In France, Strange magazine did something similar with ROM issues. As you can see the covers varied from layouts that were meant to mimic the originals to ones that had some minor changes and those that were based on the interior art. These covers kinda remind me of the Spanish ROM reprints Lopes Espi covers but I think I liked the Espi versions better.

Posted by Shlomo Ben Hungstien at 5:08 AM