Marvel Age #16 & #34 some insight on licenced properties and a ROM calendar appearance!

Well today this issue which I used to have a as a kid back in the day turned up at my door step from ebay. I was able to get it pretty cheap and I wanted to have a second look at the Sal Buscema article. It largely consists of his career and his work on The HULK over the years. Oddly enough it didn't even mention Bill Mantlo at any point which kinda sucks given how much they worked together. It doesn't have anything specific on ROM unfortunately except for one thing this splash page from ROM #55. Look at the copy right information down the left hand side.

As you can see Parker Brothers reserves the rights. After noticing this I took a look at the ROM related clip art in Marvel Age #23 as well and it's the same deal over there.
So it seems that the Parker Brothers licensing had Marvel on a really short leash when it came to the rights to Rom's name and likeness from the very beginning. Aside from articles Marvel Age magazine was also a directory to titles that had shipped and were due to be on retail shelves. Here's the Rom entry for the June shipping date and July arrival time.

You'll find this interesting. This issue also included an article about a toy based mini-series called The Starriors. The clip art that was a associated with the article also had the corresponding copy right disclaimer. But in this case it was Marvel that owned the rights so I was like "what the fuck!?". After doing a quick Wiki search I discovered that The Starriors comic and toy line was some sort of joint venture with Marvel and the manufacturer Tomy. So that makes some sense but it's not like it really matters now since both the comic and toy line did not prove to be a commercial success.
As I browsed through the rest of the issue I noticed there was some clip art by a couple of other titles that were also published by Marvel with the rights still belonging to other parties. They included Dreadstar which was still owned by Jim Starlin and Dr. Who which was owned by BBC. 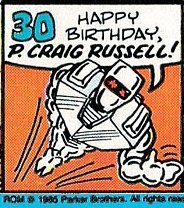 I just wanna say thank you to Gary Martin "a ROM curator" for sending me the back cover calendar of Marvel Age 34. This is so awesome! I've been wondering for years now if there was ever a Rom appearance in a Marvel Age calendar and now I know. I'm just adding this to the end of the posting before I publish it since I wrote the posting earlier today already (as in before midnight). Notice how the Parker Brothers rights disclaimer is still there?

Next posting is another 80s extravaganza with Marvel house ads that I bet you forgot about it.

Posted by Shlomo Ben Hungstien at 12:15 AM