Well, with all this newly discovered fan art I just couldn't resist making up some of my own again. Especially with the new Robocop movie hype that's been starting to get the sci-fi nerds out there into a fan boy frenzy. Now this isn't the most polished piece of ROM related art I've ever done but it is the first to have dialogue that I wrote which I think is relevant to the concept here.
There's been some rumors floating around for years now about Robocop having been in part inspired by ROM and Judge Dredd (can't wait to see that reboot too please don't suck!). There could be some truth to that. I suspect it wasn't a coincidence that several copies of ROM Spaceknight turned up in a couple of scenes in the first Robocop film. Special thanks to Lee Sietz who I appropriated these images from. More on that ROM/Robo connection here: http://www.herogohome.com/2011/11/27/super-movies-robocop/

I remember when I first saw Robocop in theaters I definitely noticed the ROM copies in the liquor store hold up scene which I thought was Hell of cool even back then since I was loving the movie and had already been a long time ROM fan. For the longest time though I had thought the robber had picked up a ROM issue and through it on the counter before he pulled out his gun. Sadly though I when I finally got a hold of a VHS tape of Robocop I realized it was an issue of  Iron Man. Which is kinda cool given that in both Robocop and in the first Iron Man film a bad guy gets pulled through a wall. The producers of the new Robocop film have a real challenge on their hands seeing as unlike the Stallone Judge Dredd the first Robocop movie was awesome. My fellow fan boys, let us pray together. 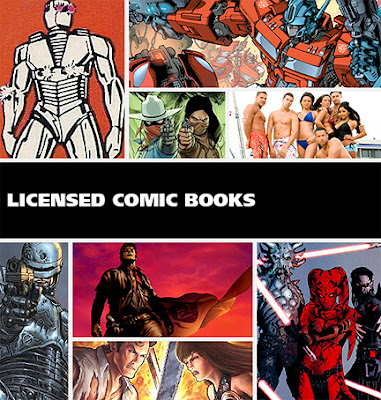 Here's a podcast from May that deals with the topic of licensed comics. These guys seem to be having more discussion that consists of them goofing on each other about their different taste in titles then then anything else. But it's kinda amusing and toward the end one of them mentions ROM a couple of times when it comes to listing their favorite licensed comic book titles.
http://www.comicspodcasts.com/2012/05/21/super-podcasto-magnifico-ep-91-licensed-comic-books/

Coming up next week, if you're feeling a little nostalgic for some ROM related 80's stuff I might have found something in yet another discount back issue bin that might make you feel a bit better.
Posted by Shlomo Ben Hungstien at 1:29 PM