Some cool ROM related moments from the HULK

I came across a copy of  Incredible Hulk#279 (Bill Mantlo & Mark Gruenwald) in the dollar bin yesterday at my local comic shop. In the opening splash page of the issue we see The Torpedo along with Sabra and Jack of Hearts among many other Marvel superheroes. The story line for this issue has to do with an award ceremony for the HULK in honor of his presidential pardon thanks to his Bruce Banner intellect now in control.
I actually really liked this issue outside of the splash page at first I thought it might end up being a bit tongue n' cheek but it wasn't really like that at all. Through out the issue we get guest appearances by a ton of Marvel superheroes many of which from various countries around the world. It was actually pretty heart felt, my favorite moments were with Rick Jones in which Jones laments the absence of the late Captain Marvel. 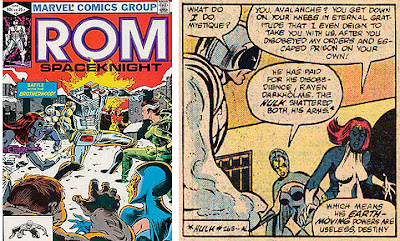 Some of you may remember the battle Rom had with The Brotherhood of Evil Mutants from ROM#31. If so you may also remember that Avalanche was in that issue with his arms all busted up. Well you can find out how that happened to him in this HULK 263 (Bill Mantlo &, Sal Buscema, Al Milgrom) review:
http://www.supermegamonkey.net/chronocomic/entries/hulk_263.shtml

P.S. Bruce, remember not to look at the quality grading on this issue it'll probably upset you.
Posted by Shlomo Ben Hungstien at 12:00 AM