I just got done watching the premier of Marvel's Agents of S.H.I.E.L.D yesterday. I gotta say I deliberately avoided all the hype around it in fear it might end up being like some "CW ish" kinda sitcom which I'm completely burnt out on especially with what a bore Arrow turned out to be. But after having seen it it's anything but! It was funny with out being campy, the action was good as were the characters (for the most part) and story line. There was no shortage of  references made to both the recent Marvel films in the last few years as well as to the actual Marvel comic book narratives related to S.H.I.E.L.D. And they even brought back agent Colson with a fairly plausible explanation. Maybe Marvel should just co-produce movies and TV shows it seems to be the only thing they're good at these days. All of which got me thinking of how well S.H.I.E.L.D was interwoven into the ROM series which is something I blogged about a while back:
http://romspaceknightart.blogspot.com/2012/05/sheild-infiltrated.html 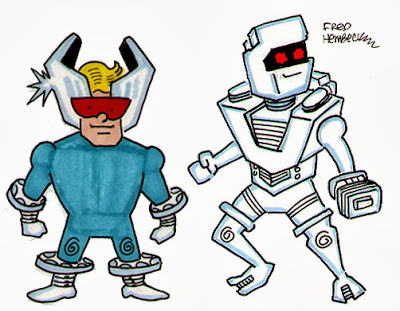 The King of Thessely gave me a heads up about a Fred Hembeck Torpedo sketch card for sale on ebay. As you all know I'm not a huge Hembeck fan but I thought both sketch cards together in one scene look kinda cool none the less. And in general I thought it was cool that Hembeck even did a sketch card of this somewhat forgotten hero of the 80s.

One last thing here I wanted to include in this posting. You remember the Eagle Moss Publications origins one shot magazines that go with those Marvel superhero lead figurines I posted about last week right? Well the issue for the Jack of Hearts figurine has an actual two page spread about Bill Mantlo's career and even covers that dreadful day of the accident. The whole thing is way too much copy for a blog posting but it's stuff Bill Mantlo fans mostly know already. However as you see here I added the last segment of it here which I enjoyed the most.