The custom figure that's too hot to handle!

Well this now makes the third Micronauts cover I've strategically inserted Rom's image into and I think this is a good time to post it given that it's Bill Mantlo's birthday. Thanks to Mantlo's imagination these characters would live on for many years after their respective toy lines long since disappeared from store shelves and stock rooms. It just sucks that we never got to see them together but of course we've had that discussion already here on more then one occasion. 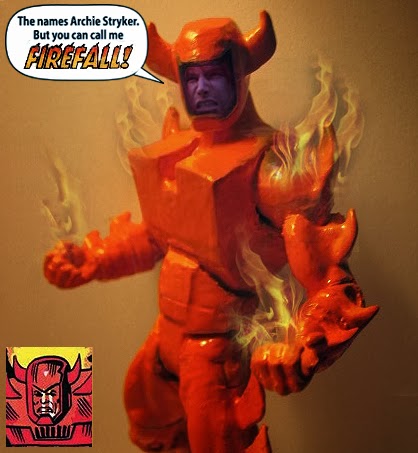 Here's a digital project I've had in the back of my mind ever since Chris produced this awesome Firefall custom. Aside from the custom it's self Chris had an assortment of well staged photos of it that almost begged to have something like this done to one of em. You all know about the back story for Archie Stryker and the Firefall spaceknight armor I don't need to get into that right?
Good, so with that said let me move on to presenting the last of Gary's foot notes. This one comes from Nova #10 (Vol. 2). Rom spaceknight #24 sure did have some staying power given all the flash back cameos and foot notes out there for it. The art work is done by Erik Larsen who I'm not a big fan of.


And now my latest back issue discount box finds from earlier this week . . .

This panel comes from the 1982 Fantastic Four Roast 1 shot spoof. Did anybody else out there know about this Torpedo appearance in it that I discovered?

Onward to some other shit I found in the same discount box that wasn't so cool. Coming right off the heels of the massive disappointment that was The Annihilators mini-series we were then treated to a shitty 3 issue (#23, 24 and 25) story arc in Avengers Academy that featured the return of Hybrid. By the time I got done reading 24 I was getting irritated with how they hadn't explained Hybrid's return as they did in X-Man 31 (1997).
By the time issue 25 came out I decided to thumb through it first and woe and behold I came across the clip art you see here. Oh man was I ever pissed! Why couldn't he have just said something like "He left Earth years ago" or "We don't know where he is and we don't have time to try and fins him". Did ya have to say Rom is dead Marvel? really!? I didn't buy that issue nor did I buy any new Marvel comic since then up until recently with Infinity and we all know how that turned out. But I decided to pick up Avengers Academy #25 for a buck just so I could share this bullshit with you all. To all Rom fans, don't buy new marvel comics it's just rewarding bad behavior and Infinity is just the latest example.
Posted by Shlomo Ben Hungstien at 12:00 AM