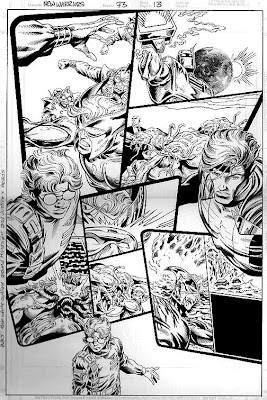 Okay so here's something I hope is at least some what new to you hard core ROM fans out there in terms of art or information. I found 3 New Warriors covers that featured Turbo prominently cause I thought it would look cool to display here but it's issue 73 that I want to focus on. First of all it has the late Brock Jones (ROM side kick Torpedo) on the cover which is cool. And as you can see to the left the interior art includes some sort of

retelling of the past Dire Wraith, Torpedo and Volx narratives. What I'm sure you also see is a panel that features a very obvious silver spaceknight. Did you know this issue was published in 1996? Did Marvel have the licensing deal in effect still at that time? Some how I doubt it so what gives? I was never into The New Warriors but if I had known back then that they were continuing the ROM mythology in even at least some small measure I certainly would have given that title a second look. You can read a thorough recap of the New Warriors #73 at this link:
http://www.newwarriors.com/html/nwv1n73.html

So if you've read the page that link goes to you'll see that issue kicks off Vlox's latest scheme. A scheme in which she appropriates the Torpedo suite, hijacks a starship and steals Forge's neo-neutralizer in an attempt to nullify the powers of Earth's heroes and also free her fellow Wraiths from Limbo. Ironically, the New Warriors series (Vol. 1) ends just two issues later with #75 (just like ROM). Obviously Volx was stopped by The New Warriors from carrying out her plans with the neo-neutralizer but as the saying goes she apparently lived on to fight another day. Hence, her appearance and agenda many years later in the Annihilators mini-series.


Now here is what appears to be a revamped version of the Torpedo "armor" I was able to find a picture of online. I can't seem to find any information about if this is the original suite with modifications

or a brand new one but it looks good! The upper portion kinda looks reminiscent of Thor's classic costume strangely enough. I know based on some published clip art that Turbo did have a suite that closely resembled this sketch at one point but I can't find any information on it other then it being worn in the later volumes of New Warriors and with another group she ended up joining called Excelsior.

5/13/11 update
I took a look at New Warriors #1 (Vol.2) a couple of days ago and the new look for the Torpedo suite (first appearance) was the result of it having been "reconfigure" for easier use.
Posted by Shlomo Ben Hungstien at 12:05 AM