ROM original by Ian Akin, yes as in Akin & Garvey. Inking is not tracing! Plus, see "Reed Richards" getting tongue spiked in the head 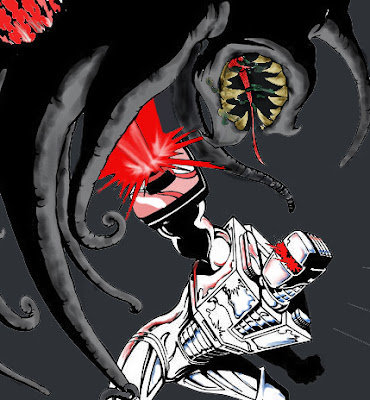 This posting title is a bit misleading. Yes this is Ian Akin's pencil and ink work but it's colored by me. And also it should be known that what you are seeing is a cropped portion of the original work. Most of you should know by now that Akin & Garvey were the dynamic inking duo that were the perfect compliment to Sal Buscema's pencils. That awesome "trifecta" was the artistic pinnacle of the ROM series. It was among some of the very best comic art of the 80's on par with giants like Michael Golden.
You can see this illustration in it's entirety at the link below. And check this out, it will open up in color but when you roll your mouse over the image you see it just penciled and inked! It's a way cool affect plus you can tell me if I did Akin's pencil and ink work any justice with my own coloring job here:
http://ianakin.com/illustration/superheroes/rom.htm

Have you ever seen "Chasing Amy"? If so do you remember how they were joking about inkers just being people who trace? I really hope there isn't anybody around who reads comics today that is that stupid. If you look below the credit headline strip you'll see what un-inked penciling really looks like as seen in this Annihilators #4 splash page. Even if you were doing a black n white comic you wouldn't send it to press like that. Now this uncolored sample clip art here from ROM #45 is what I'm talking about. Look how even in black n white it almost seems to have texture to it as if you could run your fingers over the paper and feel the art like reading in braille. 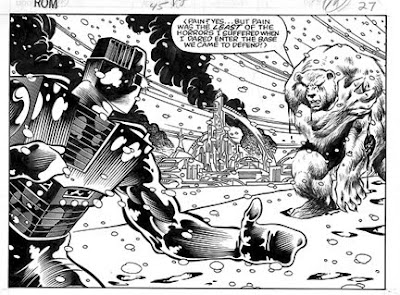