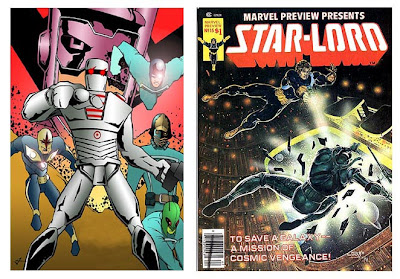 What you see here is some fan art I found on Comic Vine fan art I've ever come across featuring ROM, Nova and Star Lord together. Along with it was this comment "What could have been an even more epic team". I'm posting it here for good luck in regards to the final installment of Annihilators set to hit the shelves first thing next month. Rather your a ROM Spaceknight fan, a Marvel cosmic adventure fan or a combination there of I know what your all hoping to see far fetched as it may be.
That Marvel Magazine cover you see there was something my father got me back in 1979 when we lived in New York city. Back then my dad used to have a cab pick me up from school and drive me to his work where I'd have to hang with him for a few hours before his s 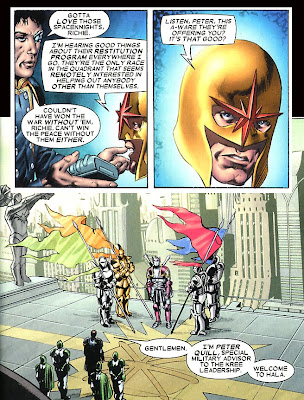 hift ended. He worked in this high rise office building over looking the water in lower Manhattan. Sometimes when he had some down time he would take me across the street to a buy me a bagel and some comics to help me pass the time. This is actually how I got my hands on the very first comics I ever had.
Star Lord was awesome in the Annihilation Wave series and I'm sure many of you out there loved him in the Guardians of the Galaxy. When he found out about Richard Ryder's fling with Gomora during the war with the Annihilation Wave his response was, "what part of the most dangerous woman in the universe do you not understand?". What a great line not to mention he called Nova "Richie" all the time. Who doesn't enjoy reading that sort of levity between characters?

After all my years of being a ROM Spaceknight fan I've never seen this before until very recently. I guess at some point over the years Rick Jones was a little suicidal or something so that's what the panel on the left I found on Comic Vine by random is all about. I think it's funny how Rick has that whole unshaven "Cast Away" man look going on. And on the right thanks to Ptor from the Sanctum we have a panel from a Dr.Strange Annual from 1992. 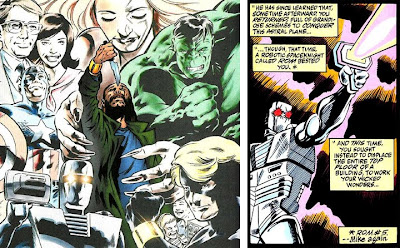