The mutant genius inventor known as Forge was enlisted by the U.S. government to replicate ROM's neutralizer for use against the Dire Wraiths. We saw this all play out in ROM 61-65 and X-Men 185-188. There was a hand held version and also the much bigger "neo-neutralizer" which was mounted on an orbital platform and constructed to be used on a planetary scale.
I just noticed an interesting inconsistency with the hand held model. The one featured in the ROM title didn't quite look like The X-Men version which was consistent with what appeared in the Forge bio page of the Marvel Universe Handbook deluxe edition. I don't know if that was an over site or just an artist interpretation kinda thing unlike the first Marvel Universe Handbook series that got ROM's neutralizer and analyzer mixed up. 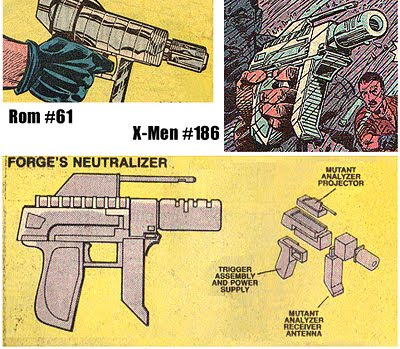 Forge's hand held neutralizer wasn't as powerful or versatile as ROM's but it did have the basic function of being able to detect Dire Wraiths and render them powerless. Unfortunately it could do the same to mutants much to Storm's detriment. 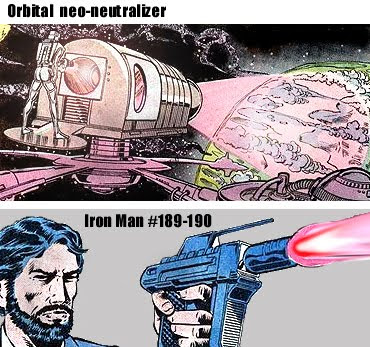 But related to that I found out just a few days ago that Tony Stark had gotten a hold of the hand held version of the neutralizer and used to on the criminal mutant known as The Termite. Here again we see the hand held version reflect the design as shown in the Marvel Universe diagram. Which in general I thought was a pretty cool design. A pity that wasn't the look it had in the pages of ROM but then again that was the Steve Dikto era in which the art work was an all around eye sore. 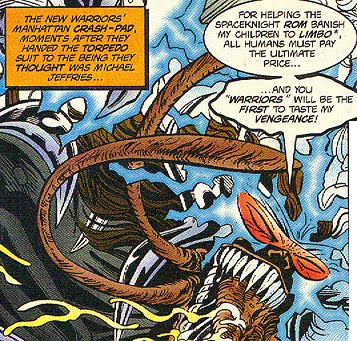 Later in the New Warriors series the Dire Wraith queen Volx who already had duped The Warriors into giving her The Torpedo armor tried using it in order to power the neo- neutralizer which she had managed to steal from the U.S. government. While in Volx's possession we learn that the Torpedo Armor had other energy manipulating capabilities that were apparently unknown to both Brock Jones or Mickey Musashi while they had it. Her scheme was to deprive Earth's heroes of their superpowers as revenge for their part in the Wraith War. Her plans were thwarted of course by The Warriors and their allies and she was seemingly killed after wards but later appeared in the Annihilators first mini-series.

And speaking of the Torpedo armor let's look at it in more detail as we discover what it's full capabilities are. 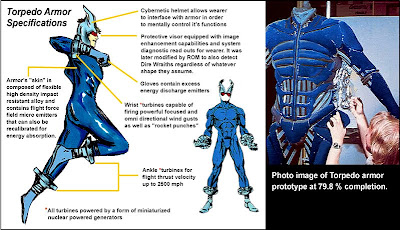