The ROM Spaceknight legacy, either do it right or don't do it at all! 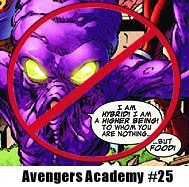 After having looked at an Avengers Academy #25 preview which concludes the Hybrid story arc I started reflecting on what Marvel has done with the ROM Spaceknight legacy over the years. First of all this was a pretty good read but would it have killed Marvel to have Hybrid on at least one of the 3 covers for that story line? Not too mention an actual explanation of how Hybrid returned would have been nice given that he was psi-blasted to atoms by Nate Grey in X-Man 31* (1997). Don't bother looking at Marvel's updated wiki page on Hybrid that won't shed any light on his return either.
Marvel's efforts on the Rom continuity has been a mixed bag but quite frankly some of it I'd like to pretend never happened like the recent Avengers Academy issues. Among the oth

er forgettable continuities was the 2000 Spaceknights mini-series along with their appearance in the Annihilation Wave . The follow up Annihilation Conquest saga basically introduced the spaceknights we would see in the first Annihilators mini-series which seem like was Marvel's way of saying that the 2000 mini-series had indeed been forgotten. But aside from Ikon those spaceknights were pretty lame too, about as useful as red shirted security guards from the original Star Trek series. And then there was the unexplained return of the Dire Wraith Queen Volx in the Annihilators mini-series who was killed at the end of the New Warriors series years before. I hate that kind of shit as if the writers don't think we'll notice logic gaps like that.
Then of course there's what I would describe at this point as Marvel stone walling us about why they're unwilling to bring ROM back in some kind of incarnation. Now for the most part I don't have a problem with how Marvel has handled peripheral elements of the ROM legacy such as the Dire Wraiths, The Torpedo armor, Hybrid and the neo-neutralizer over the years in New Warriors Vol. 1* . The story line in the 2010 Darkstar: Winter Guard mini-series* that revolved around the abandoned Wraith base (The Citadel) in Russia from ROM 42-46 was a pretty good way to introduce the Dire Wraith again into the Marvel Universe. And later again in Fantastic Four 577* (2010) as part of the Universal Inhumans. But right now I'm pretty 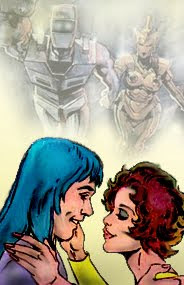 much at a point where I'm feeling like it would have been better had Marvel just left Rom, Brandy and Galador continuity alone after the Rick Jones Wedding in Hulk 418* (1994) wedding appearance so that we the fans could just assume that they lived happily ever after while over seeing Galador's reconstruction era.
In fact, I think that works for me so as far as I'm concerned I'll throw both Avengers Academy and Annihilators mini-series into that pile of forgettable Rom continuity story lines. All that could have been part of some sort of Marvel alternate universe spin off and what not for all I care. As for Christos Gage (writer of Avengers Academy), Dan Abnett & Andy Lanning (Annihilators) . . seriously guys, either do it right or don't do it at all!

* denotes all the fairly well done Rom related continuities
Posted by Shlomo Ben Hungstien at 12:03 AM