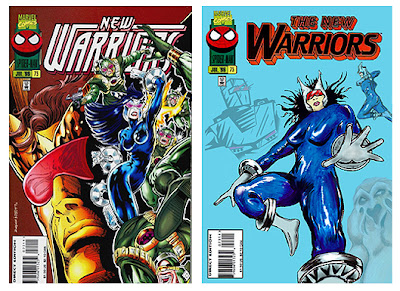 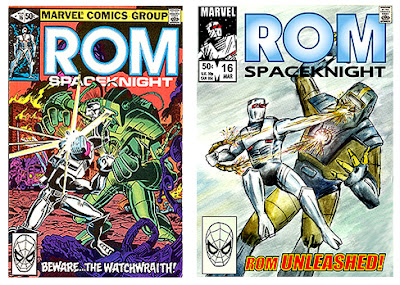 I put these covers together with some of the past fan art I've done. You may have seen the ROM issue on the recovered blog already but that guy was being an asshole about posting the New Warriors one so I'm posting it here instead. And just below we have the latest ROM related custom figurine. You all remember the infamous renegade spaceknight known as Rakk "the breaker"? 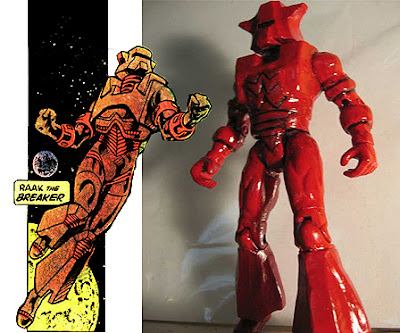 "Hello. This is my custom Breaker spaceknight action figure. I tried a few new things with this custom. He was made using an inexpensive base figure from goodwill. I believe it was a power ranger. The lack of articulation in the arms and waist bothered me at first but as this custom is really just for my collection, I used it anyway. All of the armor details including the helmet, are sculpted using magic-sculpt. I then primed the figure in black and dry-brushed a semi-gloss red over it. In the comics this character is really more of a burgundy color throughout, but I thought the bright red with burgundy accents suited him. I also tried outlining some of the armor details in black, just to break up some of that red. I've wanted a collection of Spaceknights ever since I was a child. Breaker's was always one of my favorite Spaceknight armors, so after Starshine I had to try him next. I hope you like the custom. Thank you for viewing! -Chris"

Rakk's first appearance was in ROM Annual #2. If you don't have it or have other wise never read it you can check out this Youtube slide show of that issue. Story by Bill Mantlo with pencils done by Sal Buscema and inks done by Akin & Garvey. This issue was an excellent example of how the melding of great story telling and art work made ROM such a great book: http://www.youtube.com/watch?v=UrOmqDEWQGg&feature=related