S.H.E.I.L.D, Dr. Strange, ROM & Starshine. Not The Avengers but also a mighty team up 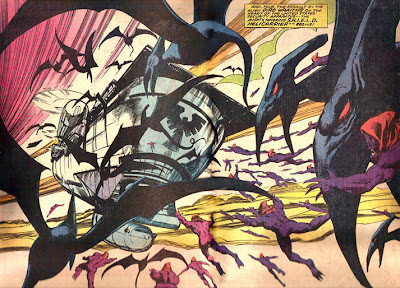 I think most of you remember this awesome two page spread of this Dire Wraith assault on the SHEILD helicarrier in ROM #53. Over at the Suicide Squad blog there was some discussion about the new Avengers film and about how both the Marvel and DC Universe utilize their various government spy and black ops groups such as SHEILD or Checkmate. Dan from http://www.itsadansworld.net/ made a good point by mentioning that Marvel did a better job of integrating groups like SHEILD in it's universe then does DC. I think he's absolutely right because we can look to the relative success of the ROM title as an example. Did you know that Mantlo had established as early as ROM #2 a SHEILD presence in the book? A character known as agent Kraller was the Dire Wraith mole within SHEILD. It was never revealed how high up the Wraith infiltration of SHEILD was between Kraller's first appearance and his untimely demise a few issues later at the hands of his fellow Wraiths for being too arrogant and carelessness and ultimately having become a liability. But regardless, it was a good move on Bill Mantlo's part since that served to integrate ROM early on into the Marvel universe which no doubt had much to do with ROM's success with readers over the years. Later in the series the Dire Wraiths had favored a direct assault on SHEILD instead of continued infiltration tactics. That brought SHEILD into the Wraith War as they used their ESPER agents to psychically hunt Dire Wraith activities on Earth. Left click on the images to magnify.

Posted by Shlomo Ben Hungstien at 12:59 AM