Epic battle between Doctor Strange & Dire Wraith witches. All that and more!

I was gonna post this Aug. 1st but screw it I feel like posting this today. This is digital art composed of found images starting with this amazing rendering of Dr. Strange by Gabriele Dell'Otto. I just thought it would be cool to have him go up against some Dire Wraiths since he was one of ROM's best allies among Earth's heroes during the Rom spaceknight series. The Dire Wraith images were picked up from Annihilators #3 (Alex Garner) and Marvel Age magazine #23 (Bill Sienkiewicz).


Here we have ROM along with some of the most popular Marvel characters ever. Unfortunately, of those heroes featured only Wolverine had ever had an encounter with Rom. This one was done by Gary Martin "a Rom curator" who as you can see went balls out on digitally coloring it. Nice job Gary, I happen to know a little bit about digital coloring myself : )

And here we have yet another from Gary. No color on this one as you can see but the scene it sets up is among one of the most imaginative I've ever seen when it comes to ROM fan art. 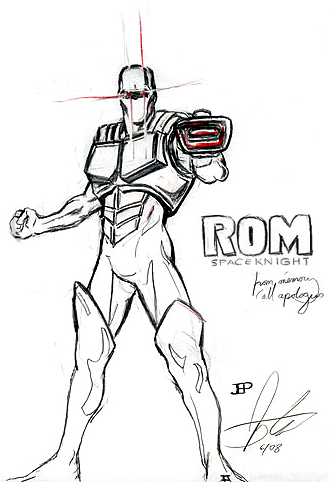 Last but not least we've got one from artist Jay Potts. This one was one of those random finds on the internet. As you can see Jay took some creative liberties with ROM's armor but it looks pretty cool as an alternative concept. Plus, from a figure drawing stand point this piece is solid I love the pose he is in.