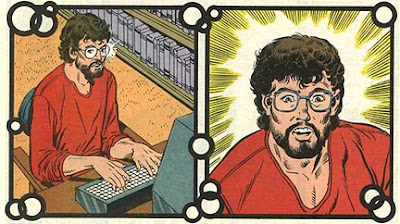 I just found something really cool. Alpha Flight #66 (Jan.1989) was the final issue of Bill Mantlo’s run on the book. He wrote 37 issues, which was a longer run than the creator of the book, John Byrne. The story is something of a tongue n' cheek farewell story for Bill Mantlo as one of Alpha Flight's characters (Manikin) makes a fuss over Mantlo's script with the issue. Although from what I can see Mantlo was never referred to by name in the story line but it's still pretty obvious it's him. I don't know how well you can see it hanging there in Mantlo's hospital room but somebody used some of the clip art from this issue to make a fictitious Alpha Flight cover. If you'd like a more extended and detailed account of the story with some more of the clip art go here: http://goodcomics.comicbookresources.com/2011/10/27/meta-messages-bill-mantlos-bizarre-goodbye-to-alpha-flight/ 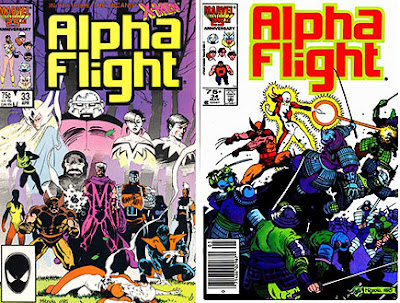 In the 80s I had a small collection of Alpha Flight issues I had picked up sporadically over the years from both John Byrne and Bill Mantlo. But issues 33 and 34 which were written by Mantlo were among my favorites. This was the era where Wolverine was really starting to become a rising star in the Marvel Universe and I was pretty eager to pick up anything with him in it. Although Rom never appeared in the pages of Alpha Flight I'm happy to say that Alpha Flight did appear in Rom issues 56, 57 and 58. 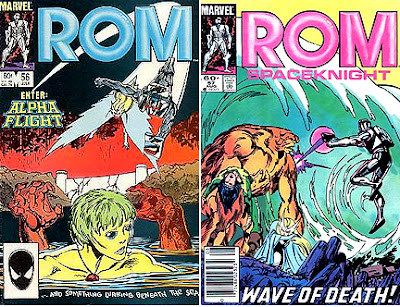 I think this is a good stopping point for now I need a break but I'll still be checking the comments sections. That's not as time consuming as putting together these postings.