This photo reminds me a lot of my child hood and early teens where I would spend hours sometimes with my comic collection back then. As you can see this collection in the photograph has no shortage of Rom back issues. You can see some Micronauts in the top right corner as well as some X-Men and Dr. Strange. I never had She-Hulk #1 but I did have about a half dozen She-Hulk issues at one point along with that Avengers issue which I got in a trade with my buddies. 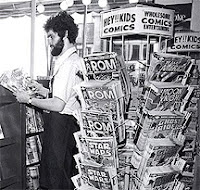 I don't know about the rest of you guys but that's something my friends and I used to do in the 80s was swap issues. Of course my Rom issues were never open to negotiations but most of the other titles I had were depending on what the other guys had to offer in exchange. Getting to a comic shop in those days was a once in a while thing since I needed my parents to drive me there. So some of my comics were bought at local liquor stores, 7Elevens and then there were the ones I was able to get from swaps. There's an earlier posting of a better photo of this spinner rack just type "spinner racks" in this blog's word search to go to that posting. Man how I miss those days! Photo courtesy of a very cool Marvel 80s blog http://www.themarvelproject.com/ 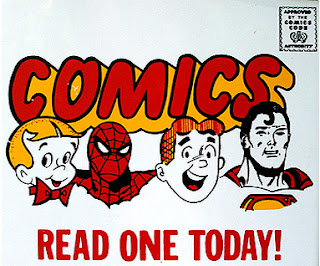 Got any fond memories from your early comic book collecting days? If so I'd sure like to hear about them, excelsior : )
Posted by Shlomo Ben Hungstien at 1:00 PM