Looks like I'm back sooner then I expected. Can you spot the ROM reference here? Also take note that Marv Wolfman and Bill Mantlo wrote this issue. Which leads me to my next feature in this posting compliments of Gary Martin "a Rom curator".

Marv Wolfman co created The Torpedo with Bob Brown. His first appearance in ROM was in issue 21 (1981) so it would not surprise me at all if Wolfman and Mantlo were aleady collaborating on the concept of having The Torpedo be a regular fixture in the ROM spaceknight series when they worked on FF 216 together the year before. Also present in this name match puzzle is the Jack of Hearts who was created by Bill Mantlo. And in case you didn't see this recent posting elsewhere about the Torpedo's career in the Marvel Universe: http://www.armagideon-time.com/?p=7459 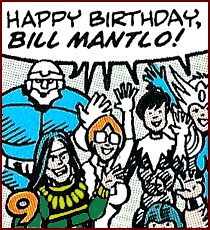 Just thought I'd throw this Marvel Age calendar date in this posting. As you know Bill Mantlo was the regular writer on Alpha Flight (issues 30-41)  for a while aside from the multitude of other Marvel titles during his amazing career .

Next up, THE TERMINATOR!