My latest back issue finds from this weekend

I just picked up some back issues at my local comic shop today. First up is the Official Handbook of the Marvel Universe (deluxe edition 1986) #15 which I picked up for $3. That issue had the complete index of alien races from the Marvel Universe including Galadorians, Dire Wraith, Thurvrians and Clavians. What makes those four races unique in the Marvel Universe is that their first appearances were in the Rom spaceknight series. Clip art of the entries for the Galadorians and The Dire Wraith (female variety) have been on the internet for years now as seen here at Siskoid's Blog of Geekery: http://siskoid.blogspot.com/2009/03/roms-aliens.html and here: http://heroalliance.blogspot.com/2010/12/dire-wraiths.html (male variety from OHOTMU Vol.1)


I'm sure most of you remember the Thuvrians from the back story in Rom spaceknight #19. That back story should have been title "The Terminator". The Thuvrians also had an entry in the Official Marvel Universe Handbook #10 (Vol.1) alien races index back in 1983 but I'm happy to see that Marvel had updated the art work for the 1986 deluxe version.

Then there's the Clavians who were the featured alien race in Rom spaceknight #71. To the best of my knowledge neither alien race ever appeared in the Marvel Universe again. Which surprises me that they made it into this alien index where as with Galadorians and the Dire Wraith it was expected.
On a side note here the ALL-NEW OFFICIAL HANDBOOK OF THE MARVEL UNIVERSE A TO Z #5 (2006) features a full page character bio for Hybrid. Even at a back issue price of $4 I probably would have still picked it up and posted it here had the featured art work not been reprinted clip art.

November 3rd update: I can't believe I'm just noticing this now. The Hibers from Rom#67 were also among the alien races profiles in this Marvel Universe issue. 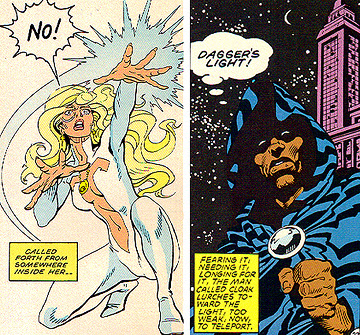 And for just a $1 I found Marvel Fanfare #19 (1984) which featured from cover to cover Cloak n. Dagger written by none other then boisterous Bill Mantlo. I haven't read the issue yet because I'm saving it for next week. I'm being transferred temporarily to another ship where I will have to live 24/7 for an entire week. Yeah, so I'm pretty sure I'll have plenty of down time on my off hours. Already as you can see the art work is pretty damn good so we know that much.