For those of you who have been following this blog for a while now you know I don't like much the majority of the fan art that was created for the Bill Mantlo benefit auction. And it seems like the least best stuff has gotten the most saturation on the internet over the years. The best example of that is the Sal Buscema at the top left there on the wall at Floating World Comics. As I posted before I know none of you had seen it before I featured it here earlier this year: http://romspaceknightart.blogspot.com/2012/06/end-of-june-rom-fan-art-sightings-sal.html
The bottom left piece has been around a lot and I think it's pretty good even though I felt Rom's head needed a bit more work. But I don't like the piece next to it at all and that one turns up a lot too all the time on the net. The top middle one gets points for over all style and design but I would have really liked to have seen Rom drawn better. But the top right one is pretty sweet yet when have you ever seen it before?

Then there's the bottom right piece which I've seen a million times now on the internet as just a black n' white line drawing. I wouldn't have even known it existed as a color version were it not for this wall art I did a screen shot of. I like it so much better in color especially when it comes to the details like on the Wonder Bread which is pretty much iconic packaging art these days. I can't even remember the last time I saw that in recent years at the grocery store but I sure remember it from back in the day. 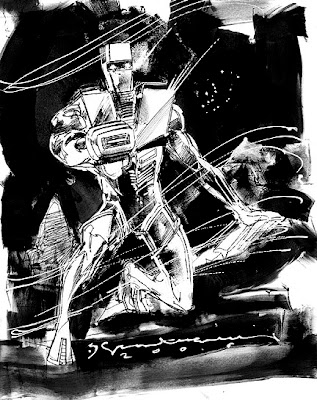 Here's something I've been sitting on for quite a while now. Over the years ROM cover art has had the benefit of some really great talent like Michael Golden and Mike Zeck. But arguably non have been quite as stylish as the covers done by Bill Sienkiewicz. This particular piece is something of a mixed bag for me of likes and dislikes. Any of you out there got an opinion about it?

Posted by Shlomo Ben Hungstien at 4:06 AM