This wonderful labor of love is by artist Dana Black. Black was quoted as saying on farce book "this was a 3 piece commission, each piece 11x17 and I loved doing every inch of this damn thing!!". It took her all of 8 months to do for the client who requested that ROM be included. 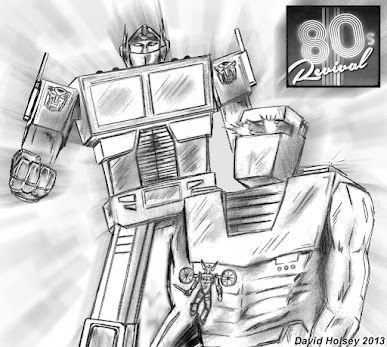 Here's a concept I've had for a little while now of doing something that featured Optimus Prime, Rom and Acroyer together in relative scale to each other. I kinda like it but at the same time it didn't quite turn out as I visualized it in my head, that happens sometimes. So after playing around with it for a while I decided to add a tag line to it and make it into an 80s tribute piece. I'm feeling even more nostalgic about the past given all the shit lately in both Marvel and DC. Between the cancellation of the Young Justice cartoon, the DC reboot and what that asshole jonothan hickman did to Galador and it's space knights recently I'm more indifferent then ever from any new stuff from DC and Marvel.
These three guys have so much in common and most of us love em all largely thanks to Bill Mantlo who wrote The Micronauts first series, the entire Rom series and the first two issues of The Transformers mini-series which launched an endless stream of Transfomers comic book titles for years to come. Speaking of which how many of you out there are old enough to remember this commercial? It's what prompted me to pick up the first issue of Transformers when I saw it at a 7 Eleven nearby the apartment complex I lived in at the time. The 80s, what a great decade!

September 25 update: And since we're on the topic of Bill Mantlo inspired coolness of the 80s I wanna give a shout out to The King of Thessaly for bringing this insanely hot Cloak & Dagger illustration by Mark Beachum to my attention.