I'm making this posting on the fly in order to feature some newly discovered videos. This one here probably won't tell you much of anything new but it's well produced and would make for a nice intro to the world of ROM for other people out there who don't know the series very well or at all. Also worth checking out is this Cloak & Dagger video http://www.youtube.com/watch?v=PqS2dCaAYG4 and this short CG video of Rom's confrontation with Firefall II http://www.youtube.com/watch?v=MTb4gddlEjQ 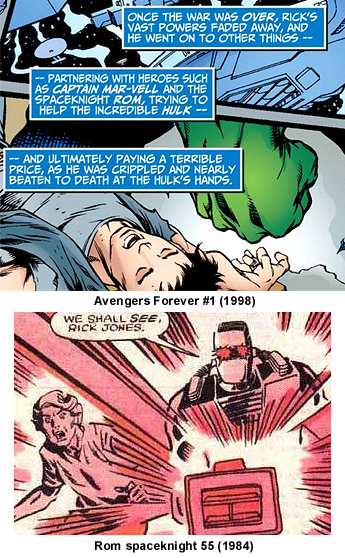 I just wanted to do a quick follow up to Lee's Seitz's posting a couple of weeks ago for a Rom reference made in Avengers Forever #1 in regards to Rick Jones's back ground. In that posting there was some question as to the legal legitimacy of the use of Rom's name in that narration box. But I still feel based on the Rom related stuff that came out just before 2000 (Nova #2 Vol. 2) and the stuff that appeared during and right after 2000 (Universe X #3 and the Spaceknights mini-series) that it was just before 2000 that Marvel lost the rights to the Rom name and likeness.
As for Jones his first appearance in Rom spaceknight was in issue 54 but it wouldn't be until 55 that they would team up against the Dire Wraiths in what turned out to be an ALIENS like story line. Jones was a regular character in the series until issue 72. A similar reference was also made back in Incredible Hulk #319 (1986) http://romspaceknightart.blogspot.com/2011/04/rom-spaceknight-cameo-from-hulk-319.html 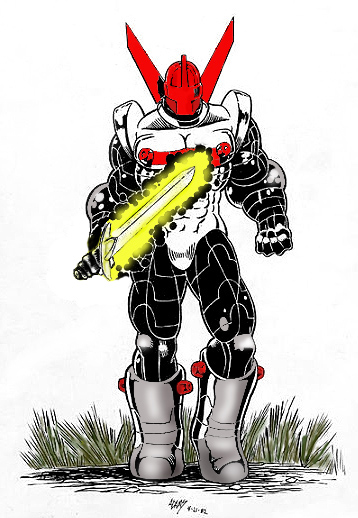 This sweet Acroyer piece by Art Adams was probably the easiest coloring job I've ever done here's the original posting where I found it: http://marvel1980s.blogspot.com/2013/08/1982-acroyear-by-art-adams.html