Some of you Rom appearance and reference aficionados will appreciate this Joe Sinnott quote and back issue price guide page I found in Comic Scene Magazine #2 published in March 1982. I found this issue in a discount bin at a comic shop way back in the day around the mid 80s. But I remembered there was something in it Rom related and rare that I wanted to see again so I recently picked it up on ebay. 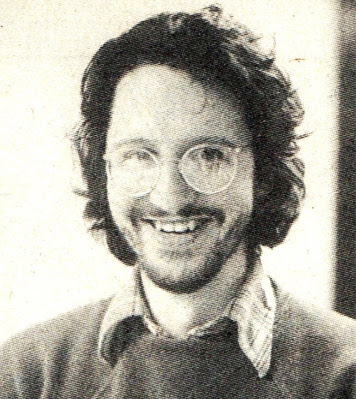 I like this early photo of Bill Mantlo. It comes from an article in Amazing Heroes magazine #60 (published in December 1984) on Bill's upcoming work at the time which was Cloak & Dagger, Rocket Raccoon, Sword of The Swashbucklers and The Derangers. The Derangers were a group of super powered individuals (Bedlam, Freakout, Breakdown, Shadow) with some serious mental problems that were supposed to be a new book title. As far as I know that never happened but The Derangers did end up being characters that battled Alpha Flight in issues 53 and 54 both written by Mantlo. 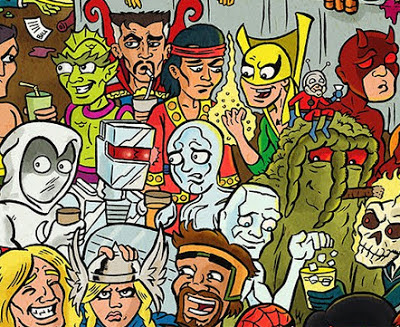 Just seeing this for the first time for some reason even though it's been featured in several places on the internet for a couple of years now. This is a portion of a recovered two page spread that Anthony Vukojevich that was originally done by Fred Hembeck as some sort of Fantastic Four Roast issue one shot. The original Hembeck version had Rom in it but he was left out in the published version. So thank you Anthony for putting Rom back in for your recovered rendition. Be sure to check out all the links on Anthony's page in order to see all the versions of this cover art: http://vukojevich.blogspot.com/2010/11/fred-hembeck-fantastic-four-roast-cover.html