How Bill Mantlo Created A Universe 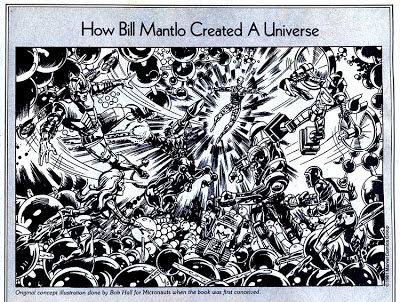 Ok one more posting before February is here. I want to share this which comes from the pages of Amazing Heroes magazine published in December 1981. I think this is really a special story so I posted the article as text so that those who don't speak English, or at least not as a first language can use the translation feature on this blog.

How Bill Mantlo created a universe
How did the Micronauts come to be? Unlike most such merchandising comic books, which are the product of business deals, Micronauts came straight from the creator of the book: Bill Mantlo. "My son had just reduced a mountain of X-Mas presents to disposable rubble," Mantlo wrote in an issue of Comics Journal a few months before the issue came out, "and sat, in the midst of this mess of paper, tearing a group of tiny shiny figurines out of their vacuum sealed packages. The figures seemed to catch the sparkle of the lights from my parents' Christmas tree. They were unlike any toys I had ever seen - and I've run the gamut in my time, from Dodge City to G.I. Joe to the Shogun Warriors. I asked Adam (that's my son's name) if I could see them before they went the way of all plastic and, when he handed them to me, I held in my palm the four basic figures of a new concept in toys called…The Micronauts." Standing there that Christmas morning, Mantlo began to fantasize, to make up the foundation for what would soon become one of Marvel's most popular series. "I envisioned them as small, microscopic even", Mantlo remembered, "inhabiting an other-verse apart from, but conjunctive with ours." Not only did Mantlo create the basic concept for the comic, but he began to consider the possibilities for characterization the characters possessed. "Space Glider seemed to suggest a Reed Richards nobility, an aspect of command, of dignity. Acroyear, faceless, his armor gleaming, a fantastic sword clenched in his coldly metallic hand, seemed to hearken back to a warrior Mr. Spock. For some reason Galactic Warrior seemed insect-like - I can almost hear clicks and whistles and strange scraping interjected into his speech. But Time Traveler…there was a mystery there, glimmerings of cosmic vastness, intimations of knowledge and space and time all having been broken down and reassembled to produce something entirely new… unexplainable…different." If this were you or I, we would just sit and indulge our fantasies for half an hour, perhaps, and then go on to our jobs. But Bill Mantlo's job consists in indulging his fantasies, and he knew he was onto something good. The following week, he walked into Marvel Editor-in-Chief Jim shooter's office and told him of his idea; Shooter, interested, got in touch with the manufacturer, Mego. "A month later," Mantlo went on, "we had preliminary photographs of the entire Micronauts line. I was, to say the least, floored. I had already begun extrapolating, based on just the four original figurines, a whole series of concepts. Now here, in front of me, were literally hundreds of additional figures, thousands of new suggested concepts…in effect, a whole world in need of a rationale for being." And thus, a Christmas present resulted in the creation of a whole fictional world- in a comic book that has now accumulated an impressive run of 40 issues and was, because of it's popularity, selected as one of three titles to be sold exclusively on the direct-sales market. Maybe Adam Mantlo deserves a co-creator credit on the book. After all, it was his toys that started it all. 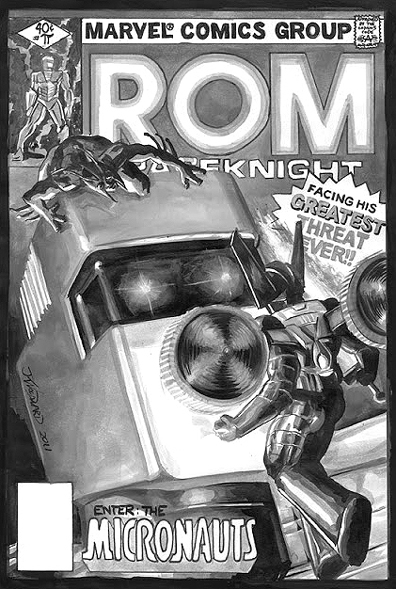 And lest we not forget that it was not too long after that Bill Mantlo would again create another universe that contained spaceknights, dire wraiths, a Golden Galaxy and a Dark Nebula. Sadly we never got a cross over of these two Mantlo inspired universes as scene in this awesome fan art.