After many months of me pestering him my buddy Randy who lives only a stone's throw away from me finally put this awesome rendering together to shut me up. Now I can move on to getting on his nerves about something else like when is he going to get around to seeing Judge Dredd which is one of my favorite movies from 2012. By the way the DVD had a ton of cool extras. 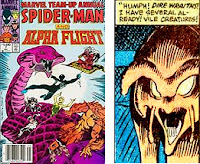 And now it's time again for a bit of 80s nostalgia. Specifically 1984 which is when Marvel Team-Up Annual #7 was published. In it we get a dire wraith cameo panel as The Collector (an Elder of the Universe) scans the Earth for alien life forms while narrating.

I gotta say despite having The Torpedo and other Marvel characters I like such as Nova and Paladin that "Defender for a Day" was really lame from what I've read by browsing through the one shot reprinting that came out late 2011. The one panel that had any real action with the Torpedo had him saying "jet thrusters do your thing" as he fires a concusion blast at the Hulk. The there's more weird stuff like more cheesy dialogue mixed in with some not so thinly veiled sexual innuendo.

I'm making an update to this posting as a result of having done some browsing over at Deviant Art tonight. I get the impression it's in part inspired by the DC reboot as well as the false rumors of Rom's return. This is just a thumbnail see the full sized version here: http://browse.deviantart.com/?qh=&section=&global=1&q=rom+spaceknight+marvel+comics&offset=24#/d5q0zp9
Posted by Shlomo Ben Hungstien at 12:00 AM