Cosmic Marvel sagas & what could have been 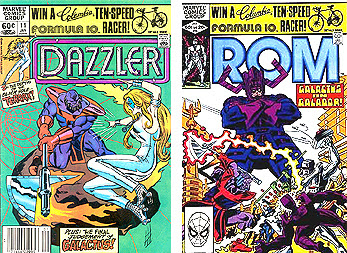 Let's kick off 2013 by going into the past about 30 years. There's a few ROM spaceknight issues that I think have at least some notoriety as being iconic in the Cosmic Marvel genre of the 80's. No doubt ROM #24 (1981) was one of them with his timely intervention for Xandar during a Skrull invasion which saw at the end of the issue Richard Rider relinquishing his Nova powers and returned to Earth.
But also, who could forget Galactus and Terrax vs the spaceknights of Galador in Rom 26 and 27!? I dunno what was more awesome the spaceknights taking down Terrax or how Rom ultimately managed to defeat Galactus by out whiting him. But those two epic Rom issues had something of forerunner at the tail end of Dazzler #11. A big thanks to Gary Martin Jr. and Ptor from The Sanctum for sending me the following clip art. And in case you forgot during Terrax's fight with the spaceknights in Rom#26 a Dazzler #11 footnote appeared on page 17.


Lately I've been finding in $1 boxes a lot of issues from the 2009 War of Kings saga that saw yet another conflict between the Shiar Imperium and The Kree Star Empire. Pretty epic stuff it had great action, great art and plenty of interstellar politics which I love. It was some of the best Cosmic Marvel adventure I've read since Operation Galactic Storm and The Annihilation Wave. How cool if  War of Kings were to have had Rom (Galador's King) interwoven somewhere in the story line. That's of course assuming Abnett & Lanning would have produced a better narrative for Rom fans then the crap that was The Annihilators.