The first half of this posting is something of a continuation of the alien races index posting at the tail end of October last year: http://romspaceknightart.blogspot.com/2012/10/my-latest-back-issue-finds.html The funny thing is unlike the Thuvrians and Clavians the "Hibers" weren't even referred to by any sort of name in the actual Rom issue (their only appearance ever in Marvel comics) they appeared in. The writers for Marvel just came up with this name for the sake of including them in the alien races index it would seem.
The Hibers entry was something I've been meaning to post for a while now but here is something I discovered just very recently in that Marvel Universe#15 (1987) back issue as well. This is an excerpt taken from the front inside cover editorial of a general over view of alien races in the Marvel Universe.

So now it would seem is a good time to share with you all yet another Rom related clip art from Gary Martin Jr. taken from the last two panels of Avengers#243. 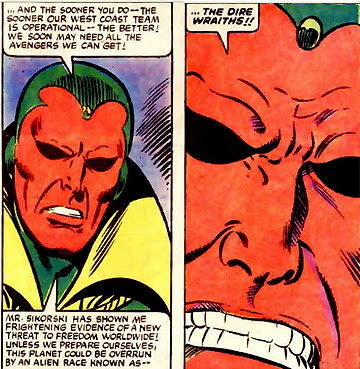 As most of you know Avengers 244 and 245 had a Dire Wraith story line which very closely corresponded to recent events in the ROM series. Mr. Sikorsky was the U.S. government's liaison to the Avengers at that time and had replaced Henry Gyrich. Just like Forge and Rom the Avengers couldn't stand Gyrich either he was a real dick head to beings with super powers. 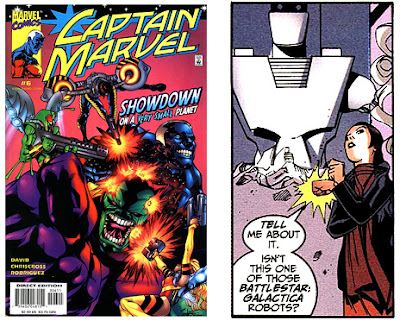 And speaking of dick heads Captain Marvel #6 vol. 3 (2001) was written by Peter David and it seems David might also be a fan of Battlestar Galactica as well as Robocop. Anyways, as far as I'm concerned this issue was largely paying homage to Bill Mantlo since it featured this Rom sculpture in Rick Jone's apartment (also seen in issue1 and 3) along with The Micronauts . . sort of. Thanks again for this clip art too Gary.
You'll notice Acroyer, Biotron, Microtron & are missing along with some of the signature vehicles and accessories they used to feature back in the 80s. The Baron, formally known as Baron Karza is only represented as a familiar silhouette shape in a flash back sequence. Marvel did something similar with Rom in Universe X #3 (2000) http://romspaceknightart.blogspot.com/2012/08/new-found-rom-cameo-plus-dire-wraiths.html You also won't find the name Space Glider used any where and The Micronauts are now simply the Microns. This supports my theory that it was in 2000 that Marvel lost the rights to both Rom and The Micronauts. For a review of the issue and more clip art: http://random-happenstance.blogspot.com/2012/02/todays-cross-no-ver-small-x-pectations.html
and http://www.leaderslair.com/legacy/captainmarvel5-006.html