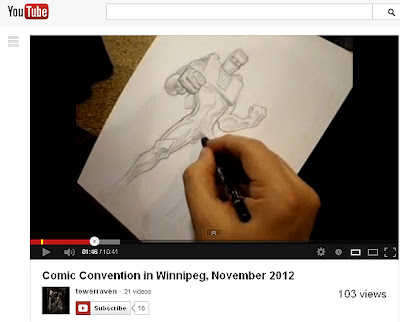 The portion of the video that shows this guy doing a Rom sketch only lasts for about 6-7 seconds but it's still pretty cool to see this going sketch in action. It comes at exactly 1:40 into the video: http://www.youtube.com/watch?v=O-72j8sJS-8


This "micro ad" makes for over half a dozen house ads Marvel had running for Rom through out the 80s. If you look at the far left side you'll see Rom#5 and Micronauts #16. To view the full page:  http://www.themarvelproject.com/2013/01/bullpen-bulletins-april-1980.html#comment-form

On a side note here I decided to take renouncing all the Rom related crap that Marvel has come up with in the last few years and new comics in general one step further. This weekend I took my copies of the Annihilators & Avengers Academy (Hybrid) to my local comic shop to trade for credit on back issue comics. As most of you know I've gotten sour on that stuff and felt like it was time to wash my hands of it completely.
Posted by Shlomo Ben Hungstien at 12:30 AM