Rom made countless cameo appearances in various Marvel titles (usually as flash backs) through out the 80s and 90s but as far as I know he only made three actual appearances in other titles in which he was the central focus of that issue's story line. Those issues being Power Man & Iron Fist #73, Marvel Two in One #99 and Incredible Hulk #296. So I thought it might be cool to feature all the last page preview headlines for the proceeding issues of the before mentioned titles.

. .  and for some reason there was also a preview headline in Power Man & Iron Fist #71 as well. Don't ask me why I got all this stuff from Gary Martin Junior and I just work here. 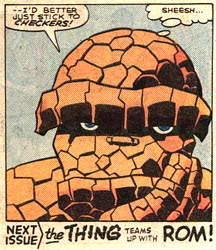 In just a couple of days we'll see boisterous Bill Mantlo take on the international drug and arms trade don't miss it!