So I hope you all enjoy this bit of digital eye candy I put together in photoshop. In a manner of speaking there really was a team up between these two superheroes and something like this hypothetical scene actually did play out in the Rom series. If you recall Iron Man was among the superheroes that made an appearance in the now classic Rom spaceknight 65 which was the climatic battle ending the Wraith War on Earth. Iron Man was even on the cover art if you recall: http://siskoid.blogspot.com/2009/08/spaceknight-saturdays-lets-get-this.html  And lest we not forget he was also in the aftermath issue on both the interior and cover as well in #66: http://siskoid.blogspot.com/2009/08/spaceknight-saturdays-what-now-brown.html  Unfortunately ol shell head didn't have any lines in the before mentioned issues but he did in this cameo panel way back in Rom spaceknight #23. I bet even those of you who have this issue forgot about this one.

Rom curator Gary Martin Jr.was also kind enough to remind me that Iron Man made flash back cameo appearances in Rom #50, 54 and 71. Despite having had my complete Rom collection for most of my life I never realized how often Iron Man appeared in the series in one way or another until I sat down and drafted this posting.
Also worth mentioning in Iron Man #190 Tony Stark used a hand held version of the neo-Neutrilizer (created by Forge to combat Dire Wraiths) to defeat the mutant Termite. To recap the issue:
http://www.supermegamonkey.net/chronocomic/entries/iron_man_189-190.shtml 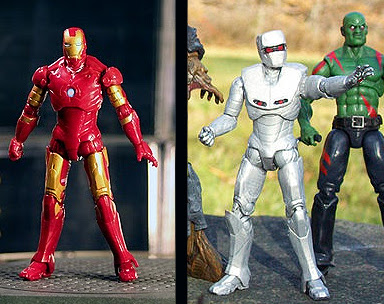 And just in case you missed this custom Rom made from an Iron Man action figure the first time I posted it earlier this year.

Posted by Shlomo Ben Hungstien at 12:01 AM