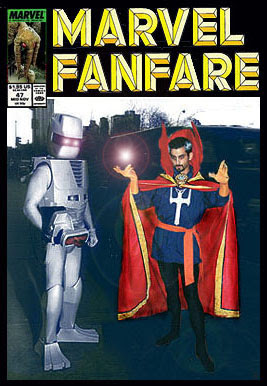 I came across a photo of ~P~ from Sanctum Sanctorum in a full on Dr. Strange costume (winner of the Wizard mag. 6th Annual Halloween costume contest) and I just knew I would have to do something with that! So along with some ROM costume clip art I found online I came up with a way to re-introduce The Greatest of the Spaceknights and the Master of the Mystic Arts who have teamed up on more then one occasion.
When you think about it, ROM#65 should have had Dr.Strange play a pivotal role in winning the Dire Wraith war much like Forge did. Especially when you consider the mystical nature of the impending apocalyptic Wraith World Merge, not to mention the appearance of virtually every other Marvel super hero. The issue opens up with ROM under some sort of spell that had him immobilized. Maybe instead of a kiss from Brandy like something out of a Disney fairytale, Dr. Strange arriving on the scene to caste a counter spell might have suited the story line a bit better I think. He didn't even make a token appearance like maybe one of those panels where you barely see him in the back ground some where amongst other heroes. http://itsadansworld.blogspot.com/search?q=rom+65 Just one of those stupid over sights I guess that happens once in a while. But since Steve Dikto penciled this issue it was pretty much f@#$%* anyways from the get go (see Aug. 22 posting).

Posted by Shlomo Ben Hungstien at 10:10 AM