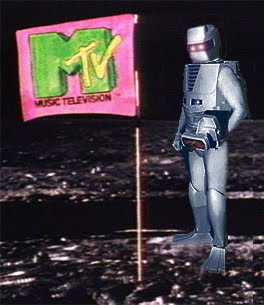 This article was sent to me from It's a Dan's World ( see blog roll ) this morning. What a great find and a great way to kick the day off. The article got me thinking about those iconic 80's MTV commercials I watched as a kid. So the idea for an image on this blog posting to go along with the article came to me quite naturally of course.

MTV: I know you're a longtime comics reader, but now that you're a comics writer, is there a project or a character that you're dying to tackle?

BROOKS: I've always loved comics — especially being as dyslexic as I am, comics were a great way to read for me. They sort of opened the door to reading for me. I think the first thing I ever read in my entire life, comics or otherwise, is the very first "Rom: Spaceknight" annual.

BROOKS: You know, "Rom" is the only comic that I've ever seriously collected. I've never been a collector really, but with "Rom" I was there. When I was a little kid and that moment happened when first read something start to finish, that was so empowering. It was like that "Back To The Future" moment when George McFly punches Biff in the face, and he's like, "Wow, look what I can do!" That's how it felt.

But once again proving how my finger is not on the pulse, all my friends growing up were into X-Men, Justice League, and Superman, and there was "Crisis On Infinite Earths" and all that, and there I was reading "Rom." Now that we've seen what special effects can do for "Iron Man," though, I'm like, "Come on, folks. Rom. Let's do it."

MTV: Wow. I can't argue with you there. Go Rom!

MTV commercial clip of planting of the MTV flag on the moon from the dawn of the 80's. You remember how that music goes right?
http://www.youtube.com/watch?v=182oUgBfoLE&feature=related
Posted by Shlomo Ben Hungstien at 1:31 PM