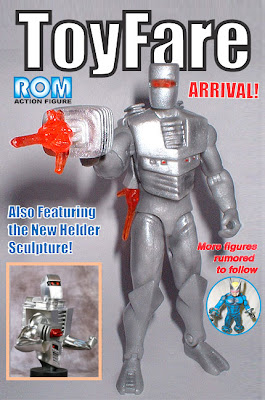 Ok I'm still sticking to what I said about the Torpedo figure in my last posting but I have to admit this ROM figure is a close second. Plus I thought it would makes for a good cover shot (especially with a little photoshop enhancement) . I don't really know much about it other then that it's creator is someone by the name of Alyosha and that he had it on ebay around June last year. Presumably it sold because according to a blog posting by Eclectic Lee (see blog role) it was going for up to $66 at one point. Sure a bit pricey for an action figure but hey, it's a one of a kind sorta thing not too mention all the work that went into it. And if need be you can always get by on bread and water for a week or so. Not really that big of a deal especially when you consider David Blaine went with out food for nearly a month in yet another one of his acts of insanity . . er i mean endurance. You can find out more about how it was put together:
http://www.toyark.com/news/custom-toy-news-47/marvel-universe-rom-spaceknight-of-galador-custom-1125/
Posted by Shlomo Ben Hungstien at 3:43 PM