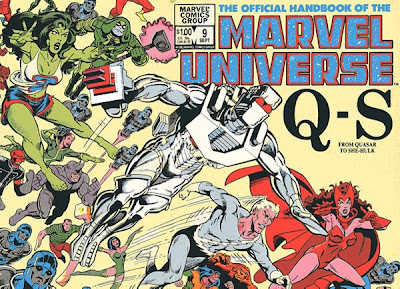 Q-S: ROM
I'm sure this front & back cover splash page from Marvel Universe #9 should help out any of you out there who may have had some trouble finding our silver spaceknight in my last posting. I was at a 7 11 with my dad when by chance I first saw this issue . It blew me away to run into comic book title that featured ROM so prominently> on it's cover. This was long before I had my own money so I had to hit the old man up to buy it for me which he was glad to do cause he new how much I loved all things ROM.
Imagine my disappointment a few years later to discover the deluxe version of Marvel Universe's page for ROM drawn by Steve Dikto who portrayed ROM in human form wearing an outfit that looked more like something to be worn by Galador's official court jester then by it's ruler. As if that wasn't bad enough ROM was also completely absent on the front and back covers. "So f#$% you Marvel you can blow me for that issue!" Sorry folks for that vulgar display of profanity but I really needed to get that off my chest. And so, moving on . . .

Now I know not every person who's a ROM fan is also a fan of The Torpedo but as ROM's unofficial side kick I think he deserves some attention too, especially in light of his untimely demise (see issue 50). Here is a guy many of us can relate to. A family man trying to juggle his career and being a part time hero so he can remember what life was like before marriage. And with a name like Brock Jones who knows what sort of life he had back then. Rather ironic I think that Brock would some day b 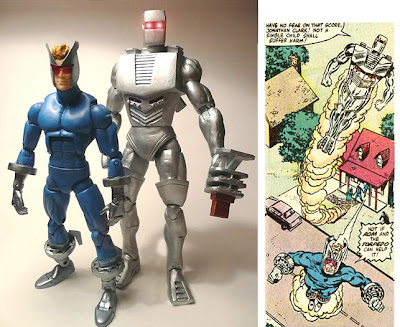 ecome a super hero known as The "Torpedo".
I came across this figure online by chance and I have to admit it looks pretty damn good with the detail and all. And as much as I hate to admit it, it looks better then any of the ROM custom figures I've seen floating around out there thus far. So rest in peace Brock and take your place among the fallen heroes in the Marvel Universe. Even though you had the misfortune of having had your brains sucked out of your head through the barbed tongue of a Wraith at least some fanboy out there made a cool action figure of you. For a recap of issue 50 go to :
http://siskoid.blogspot.com/2009/04/spaceknight-saturdays-50.html
Posted by Shlomo Ben Hungstien at 10:52 AM