Bill Mantlo from this past weekend 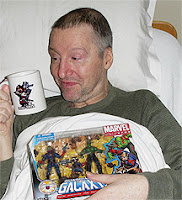 Just wanted to share with you all this nice photo of Bill from his brother's latest visit. As you can see he came bearing gifts. Regardless of most anything going on in your life if you're a fan of Bill Mantlo's work it's gotta make you feel better about things over all when you see happy moments like this for Bill. 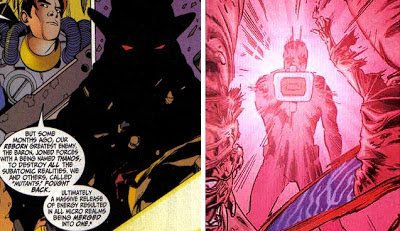 The following clip art was published in Marvel titles (Captain Marvel #6 vol. 3 2001 & Universe X #3 2000) for issues that came out right after Marvel lost the rights to both Rom and The Micronuats. What I like about these panels is how the respective artists managed to represent both Baron Karza and Rom with out actually drawing them technically speaking. That sort of thing takes a unique skill set as an artist. So here comes my pun you might say in the case of Baron Karza you might say he's just a shadow of his former self in comparison to my last posting.

Unlike Rom spaceknight and The Micronauts The Human Fly was not inspired by a toy line but instead by real life daredevil Rick Rojatt. There's not a whole lot of fan art for The Human Fly out there on the internet but I would have to say this rendering I found on Deviant Art is the best I've come across so far. 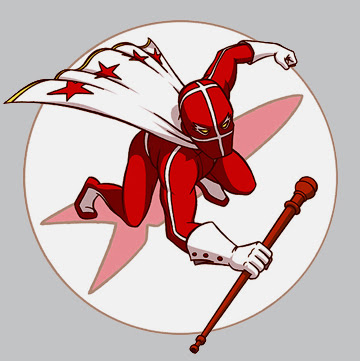 Also, there's a number of  fan art pieces in the Cloak & Dagger fan folder on Deviant Art. be sure to scroll through all 6 pages there's some really great stuff there http://cloak-n-dagger-fc.deviantart.com/favourites/?set=48825402&offset=0