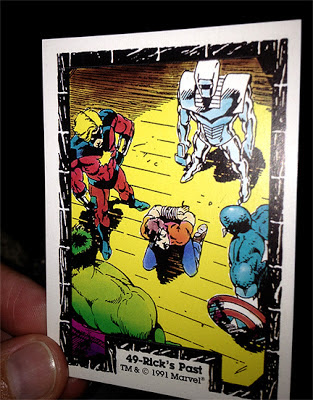 A big thanks to Rick Hansen who sent me this card along with this Facebook message: "I know you're familiar with this scene, but I thought I'd share. The owner of my LCS gave me an entire set of 1991 Hulk trading cards and this one is obviously notable." The panel used on this trading card is from Incredible Hulk 374 in which Rick Jones was being tortured by skrulls who among other things impersonated heroes he's been a side kick to.

Most of you already know about these Over Power cards as described at Lee's site Rom Spaceknight Revisited: http://home.hiwaay.net/~lkseitz/comics/Rom/othermedia/index.shtml
Also, note worthy is the Rom electronic toy trading card by Plaidstalliones: http://www.plaidstallions.com/tradingcards.html 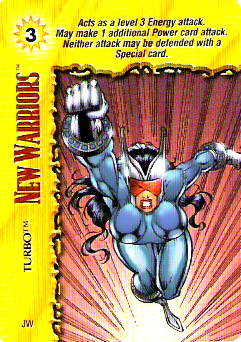 You may also be interested to know about Turbo having had her own Over Power card. And indeed Turbo is quite over powering here especially with her huge boobs but I'm not complaining. It appears as if these Over Power cards had original illustrations created for them. Beyond that I couldn't tell ya anything about these cards since RPG games have never been my thing. I also couldn't tell ya anything about this Dire Wraith trading card which seems to part of some sort of Magic The Gathering type card game. But I can tell you the clip art used for the card is from the first page of Rom# 49 that kicked off the Massacre Of Clareton which among other tragedies in the series was the death of Brock Jones (Torpedo II). 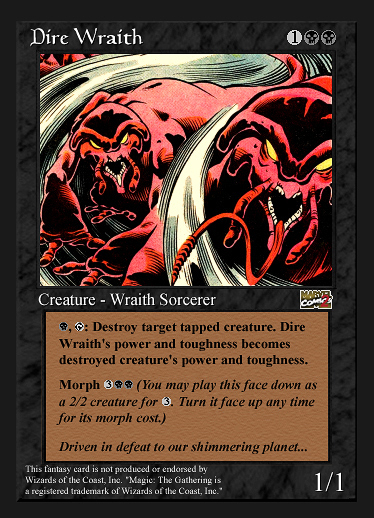 Brought to my attention recently by Gary Martin Jr. are 3 other Marvel trading cards that feature the covers of Marvel titles that have Rom and Dire Wraiths on them. I'm only making a text mention of the first two because neither card features any sort of distinctive decorative trim so there's nothing to see there that you all haven't seen before: Marvel 1st Covers series II (1991) -West Coast Avengers #1 / X-Men Cover Trading Cards series II (1990) - X Men #187. 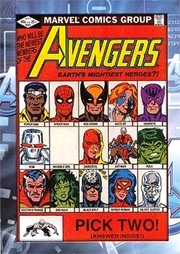 Now this one from last year's Avengers Assemble trading cards series is kinda interesting. I say that because this is now the second time I know of that Marvel published Rom's name and likeness in the last couple of years. The first time I noticed it at a local comic shop in the Secret Wars II Omni Bus TPB late last year and as far as I can tell no one is screaming for a law suite over it.


Brian Michael Bendis: Sometimes it's the thought that counts the following is a quote from an iFanboy article from three weeks ago with Bendis on upcoming Guardians of the Galaxy projects:  "While all this info about the Guardian of the Galaxy is interesting, we did ask the question that was on everyone’s minds: what does this mean for ROM: SpaceKnight? After stopping laughing, Bendis responded, “Listen, no one would love the return of ROM: SpaceKnight more than myself. I have made it clear to anyone who will listen, the minute anything like that ever became available to us…” and then clarified that Marvel doesn’t own the rights to ROM: SpaceKnight, “I would stop the story I was in the middle of doing…and I said this about Avengers too. Right in the middle of any event or any storyline…when I was doing Moon Knight,  the minute I was able to write the words “ROM: SpaceKnight” into a script, he would literally just crash into the story. Boom! That would be it”.

Posted by Shlomo Ben Hungstien at 10:51 AM