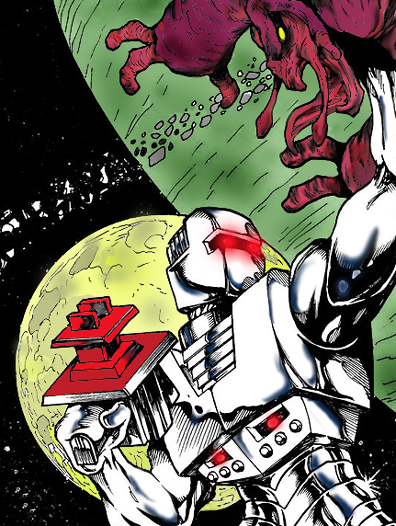 You can see the original art work here:
http://browse.deviantart.com/?qh=&section=&global=1&q=rom+spaceknight#/d2dnhtm

A couple weeks ago I found Cloak & Dagger #11 vol. 2 (1986) in a back issue bin for a couple of bucks. I was interested in it because part of it takes place in Bethlehem and in essence was another story revolving around the Israel arab conflict written by Bill Mantlo and penciled by June Brigman. This would have been a great opportunity to have CnD team up with Sabra but I think Mantlo wanted to avoid controversy for this issue given Bethlehem's disputed status. Instead, a new character by the name of Beth Stein is used in the story and she never uses the name Israel for her country of origin even though it's obvious she's an Israeli counter terrorist agent out for revenge on islamic terrorists who are responsible for a bus bombing.

The drug and arms trail that CnD follow later takes them to South East Asia in which they are forced to take down a Vietnam war vet turned drug Warlord thanks to his latent mutant powers triggered by the opium he's forced local villagers to harvest.

I have to say I enjoyed this issue more then the other Cloak & Dagger stories I've read in recent months from 80s back issue boxes. Taking CnD out of the New York City street level adventures to something more broader in scope that brings history and politics into the story telling.