Well it seems that Captain America 311 turned out to have even more in store for us then just the flash back cameo of Rom#14. After I wrote and published that posting I gave the issue a thorough reading and it turned out to be an over all good issue. Steve Rogers during an interview at Marvel Comics is offered a job penciling Captain America. Ok the irony here is a bit heavy handed but I still love it. Plus I found me some Rom Easter Eggs!

They shouldn't be too hard to spot so I'll leave it up to you good people to find em : ) Truly a dollar well spent. By the way I never knew Steve Rogers could draw!? 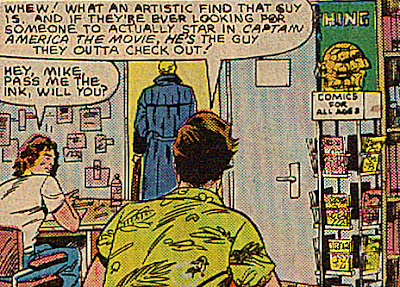 And here's another Easter Egg of sorts. The Avengers movie DVD and Blue Ray contains a documentary in the special features called Marvel Studios Building a Cinematic Universe. At one point it features a moving montage of Avengers images and clip art in which from 8:08 to 8:12 we see the cover of Avengers #221 which as most of you know featured Rom on the cover. I hardly think there's a Rom fan out there who doesn't have or at least has seen this cover but just in case you can get a better look at it here: http://marvel.com/digital_comics/issue/5156/avengers_1963_221

Next posting, Rom gets involved in the 2012 presidential race, more Easter eggs, even some Rom body art that you've never seen before and even more!