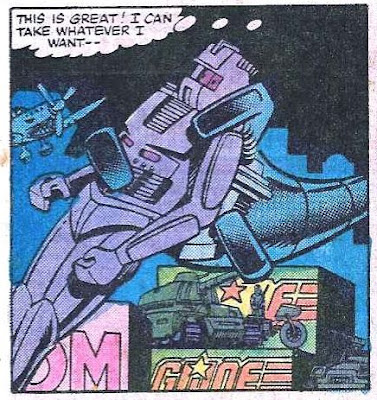 I want to thank Gary Martin Jr. for supplying me with clip art from Peter Parker Spectacular Spiderman 72. What's going on here is that there's a toy shop that's being robbed by some over grown Dr. Octopus wannabe named Olie Osnick. I totally dig how you can see some G.I.Joe packages as well as the Rom doll. This Spiderman issue was written by Bill Mantlo so that pretty much explains the Rom doll but who knows about the G.I.Joe stuff. Plus there's other panels that included other sci-fi/comic genres such as one where a tie-fighter can be clearly scene. I'm sure this was a pretty fun issue to work on since any number of the production staff probably had a chance to work in a reference of their favorite toy line. The Spiderman photo you see there was just some random cool thing I found recently. Notice anything about it?

More Rom likeness appearances were seen at Rick Jone's apartment in the form of a bust sculpture. The clip art presented here courtesy of Gary Martin Jr. again comes from Captain Marvel #1 Volume 3 (2000). Issues 4 and 6 offer views of the statue as well but their not as good as the views seen in the first issue.
Also, it should be noted that Incredible Hulk #467 features a full page of an older Rick Jones in his home in which in the back ground on a shelf a portion of Rom's "helmet" can be seen. It's one of those things where it's kinda cool that's it's there but it's a pretty obscure Rom likeness cameo compared to the other stuff out there that I've featured on this blog. 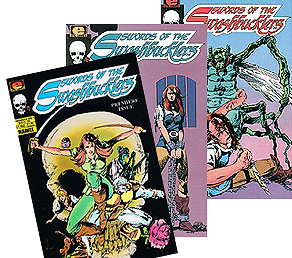 Just this past weekend I made some more great discount back issue finds from Bill Mantlo's past career with Marvel. In San Francisco I found issues 1-3 of Sword of the Swashbucklers in oh so rare 3 for $1 boxes. Check out this portion of some fan mail in the letter column of issue 3. Now this dude was one hard core Bill Mantlo back when that name hardly meant anything to me.
And for just a bit over a buck each I also found The Human Fly 8 and 9 guest starring El Tigre Blanco! White Tiger just sounds so cool in Espanol doesn't it? The first Puerto Rican super hero (but born in NYC) White Tiger was created by Bill Mantlo and George Perez.