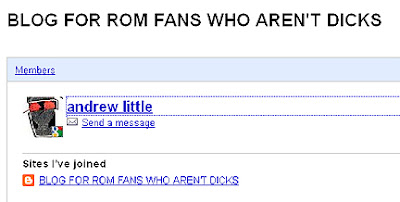 This is the first time I've ever done a posting like this because it's never been necessary before. This little troll here who I'll call andrew little dick apparently has been having a temper tantrum ever since I banished him from the comments section of my blogs. It all started with him going over the the Suicide Squad blog and leaving some comments there as someone who has no idea about anything or any character that's being showcased there. Alright no big deal but when I suggested perhaps he was out of his element on that blog as opposed to this one he had a fucken melt down and called me a "nazi moderator". 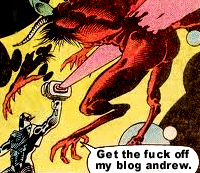 Now one could make the case that I was perhaps a bit obtuse with my comment to him on the other blog. Ok fine so all one has to say is hey dude that was a little out of line. For which I probably would have just said yeah sorry about that I'm just more accustomed to commentators here being familiar with the subject matter given my blogs are pretty much character and team centric. But in the case of this stupid mel gibson like asshole instead of leaving it alone he then had to come back to this blog and start up with some more not so thinly veiled anti-Semitic comments using the Sabra & Red Skull characters which I also banished.

I've had this blog for over two years now and this schmuck is the first official Rom fan who's been here and is a dick. Now you've got something to brag to your friends about for the next 6 months of your failed and useless life you little cry baby.

P.S. andrew, Sabra would hand the Red Skull's ass to him just like Magneto did. Just like I handed yours to you here.
Posted by Shlomo Ben Hungstien at 4:53 PM