The Arrival by John Romita Jr. and a little known Rom cameo in Captain America 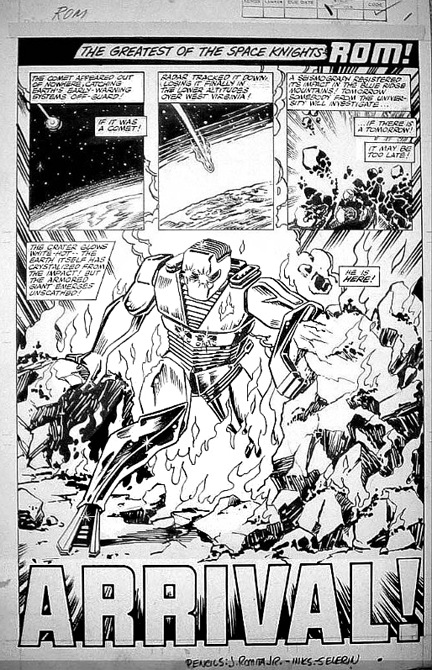 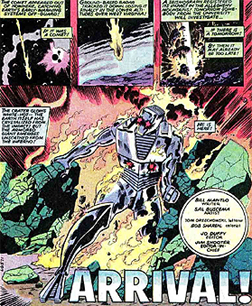 Lee Sietz has had something about this on his website Rom Spaceknight Revisited for some time now but I'm sure there's at least some Rom fans out there who don't know about this. So I'm sharing this cool find I made at Comic Art Fans. John Romita Jr. and Marie Severin developed the art work above as a sales pitch by Marvel to Parker Brothers back in the day. At a glance it may look like what ended up being page1 of Rom's first issue but there are some differences as you will see after a closer look. They're both pretty sweet. 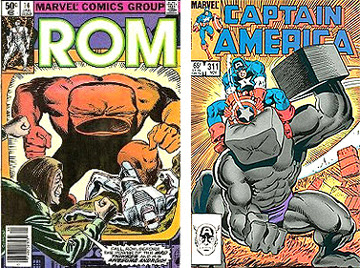 Oh boy did I ever make a good $1 bin find recently. Also thanks to Rom Spaceknight Revisited I had learned about this flash back cameo Rom made in Captain America #311. I was able to find the cover art but I couldn't for the life of me find the particular clip art anywhere on the net. Then woe and behold I lucked out one day at one of my local comic shops. In the issue Captain America stumbles across The Mad Thinker's awesome android in a barn and they get into a rumble as the cover suggests.

I gotta tell ya folks. This was one of five back issues I picked up yesterday and I also took the time to browse at some new stuff on the shelves. I've just felt so detached from new comics in recent months. I'm happy to check out some of it online in reviews and what not but when it comes to doling out my money nothing makes me happier then to spend it on stuff like this. I guess I'm just kinda old fashioned that way.

Next up, Bill Mantlo and what his work said about what kind of human being he was.